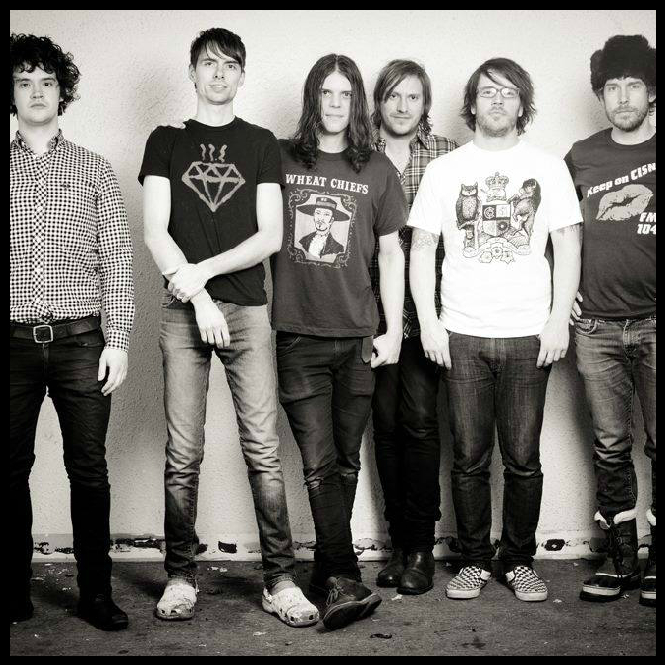 Yep, I’m writing a bio for my own band. Welcome to the world of Shout Out Out Out Out. We do a lot of things ourselves, really. I produce and record our records, Jason and I run a small record label that releases our records, Lyle designs our website, Gravy takes our photos, Will and Clint provide youthful exuberance and comic relief, we all do our part. We live in Edmonton, Alberta, Canada. It’s an alright place: cold in the winter, hot in the summer, people are, for the most part, friendly here (regardless of what our exceptionally high murder rate would suggest). There’s not that much more to say about it really. I guess it is the kind of place where if you want to get anything done, you pretty well have to do it yourself, so maybe that’s why I am here writing this.

Shout Out Out Out Out formed in the summer of 2004. We had all been playing in a variety of scrappy rock and punk bands, and came together with a shared interest in synthesizers, a burgeoning interest in electronic music as a whole, and a strong desire to take ourselves out of the comfort zone of our previous musical experiences. Our earliest incarnations were pretty crude, learning as we went along, but luckily it seemed to resonate with local crowds, more so than any other project we had previously been involved in. We released our first album, Not Saying / Just Saying in 2006, and it was well received beyond our expectations, earning us a nomination for a Juno Award (we didn’t win, oh well), and raising our profile in Canada significantly. This led to a buttload of touring throughout North America, with the reputation of our (truly) live show helping to expand our base of fantastic supporters. It eventually took us 3 years to record our sophomore effort Reintegration Time, which we released this time in Canada, the US, and the UK/Europe to an inspiring and positive response, again beyond our expectations. More touring followed, in all of the markets where Reintegration Time was released.

Our new album, Spanish Moss and Total Loss, was recorded over the course of 3 months in our hometown of Edmonton. We strongly feel that it is our best work to date (and so we should, what would be the point otherwise?). The album marks a bit of a departure from our previous material, or rather a natural progression. Since our humble beginnings in 2004, we have grown to be fully encompassed in the world of electronic music, and this is now our world and the way we think about things. We tried to write a record that we would all personally listen to, and a record that we would be proud to play as DJs (we do that too). This is our most ambitious production to date, expanding our previous instrumentation of two drummers and four bass players (with a mountain of analog synths), to include Rhodes piano, baritone guitar, saxophone, and well, even more synths. As on our previous two albums, I sing through an old analog vocoder, and lyrically I try to tackle my own demons, dreaming of a life where I can just stay on vacation forever, not having to deal with being broke all the time or be reminded of personal failures. Yeah, I know, poor me… but really, writing dance music is actually a pretty therapeutic way to diffuse my problems. To our ears, this album breathes nicely, is more melodic and varied than our previous efforts, and marks a step forward in our ability as songwriters as well as our comfort level as producers of electronic music. We have been strongly influenced by classic House music, Techno, Disco, Krautrock, and a variety of cosmic synth music, and I feel all of these influences have crept their way into Spanish Moss and Total Loss. We are tremendously proud of this album, and we hope you enjoy it.