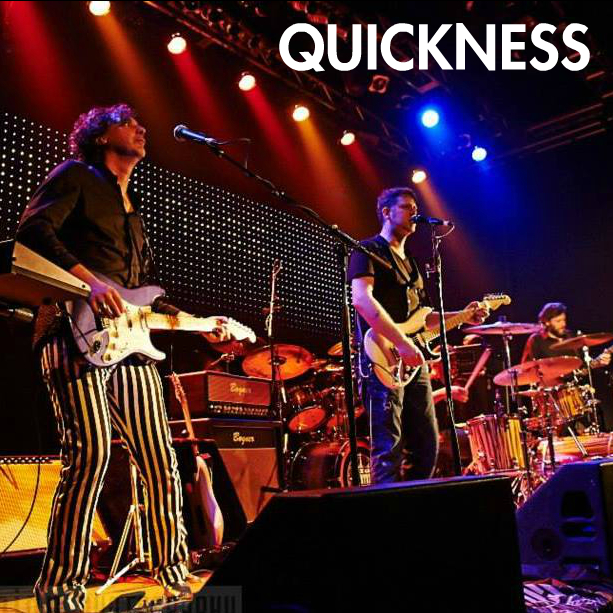 You like Rock n Roll with Deep funk drums & bass? Add 2 great singers to the mix and a vast repertoire of dance rock mayhem & you get Quickness. The buzz began in June 2011 with the release of Anthems for your Ghettoblaster recorded and mixed entirely by the band in their studio The Bunker. Media response to Quickness has been swift, Western canada’s The Province Newspaper naming the debut Quickness record Anthems for your Ghettoblaster as being one of the top ten albums of 2011. With songs featured at dozens of Rock and Hot AC stations, multiple TV & radio appearances, and nearly 150 concert dates and private performances since january of 2012. Quickness is packing dance-floors in concert venues and carving out their own niche in the process!

“Quickness is blessed with a talent for writing concise and cohesive songs, smartly contructed and simply stated… a new band with a punk attitude but accomplished playing, convincing emotion and a selection of good, varied songs.” Tom Harrison the Province Newspaper

Quickness is fulfilling big commitments to a quickly building music career, Spring 2013 brings Quickness to the Whistler Ski and Snowboard Festival, the Vancouver Sun Run for a confirmed 47,000 participants, and about 25 other performance dates in BC leading up to June. New songs are written and being recorded now with a handful of talented producers as well as some of the industry’s best, all on the hush hush of course. And most importantly, plans are in the works for a large scale fall tour.

Quickness :: Anthems for your Ghettoblaster is available on itunes, Amazon and many other online music outlets

Top ten BC made albums of 2011 in The Province Newspaper :

“Quickness, a new band with a punk attitude but accomplished playing, convincing emotion and a selection of good, varied songs.” Dec. 28 2011 tharrison@theprovince.com

“Album of the week - Quickness: Anthems For Your Ghettoblaster” The Province Newspaper, August 1 2011 Vancouver, BC, Canada

“Quickness is blessed with a talent for writing concise and cohesive songs, smartly contructed and simply stated… As well, Jacob Dryden’s vocals are impassioned and his guitar-playing also suggests a Jimi Hendrix influence, which adds an extra dimension to the band. Quickness sounds more versatile and flexible than it’s rather narrow description indicates.” The Province Newspaper, July 30 2011 tharrison@theprovince.com

‘’Quickness delivers radio rock in all its post-hardcore glory. Soaring melodies and vigorous riffage round out their sound, while echoing hints of reggae and new-age anthem rock. Coupled with skin-tight, K-os certified drummer Ray Garraway, Quickness is unstoppable in its hard-hitting soundscapes. “It’s easy to get into!” exclaims the man behind the kit. Well, that’s an understatement if I ever heard one. Not only are these veterans astounding in their musical accessibility, but lead singer/guitarist Jacob Dryden’s lyrics are simply overflowing with everyman-imagery. It’s the kind of stuff relatable to anyone with a heart and a social conscience, and it makes for some downright feel-good rock-n-roll.‘’ Jan 20 2010 Ben Rowley