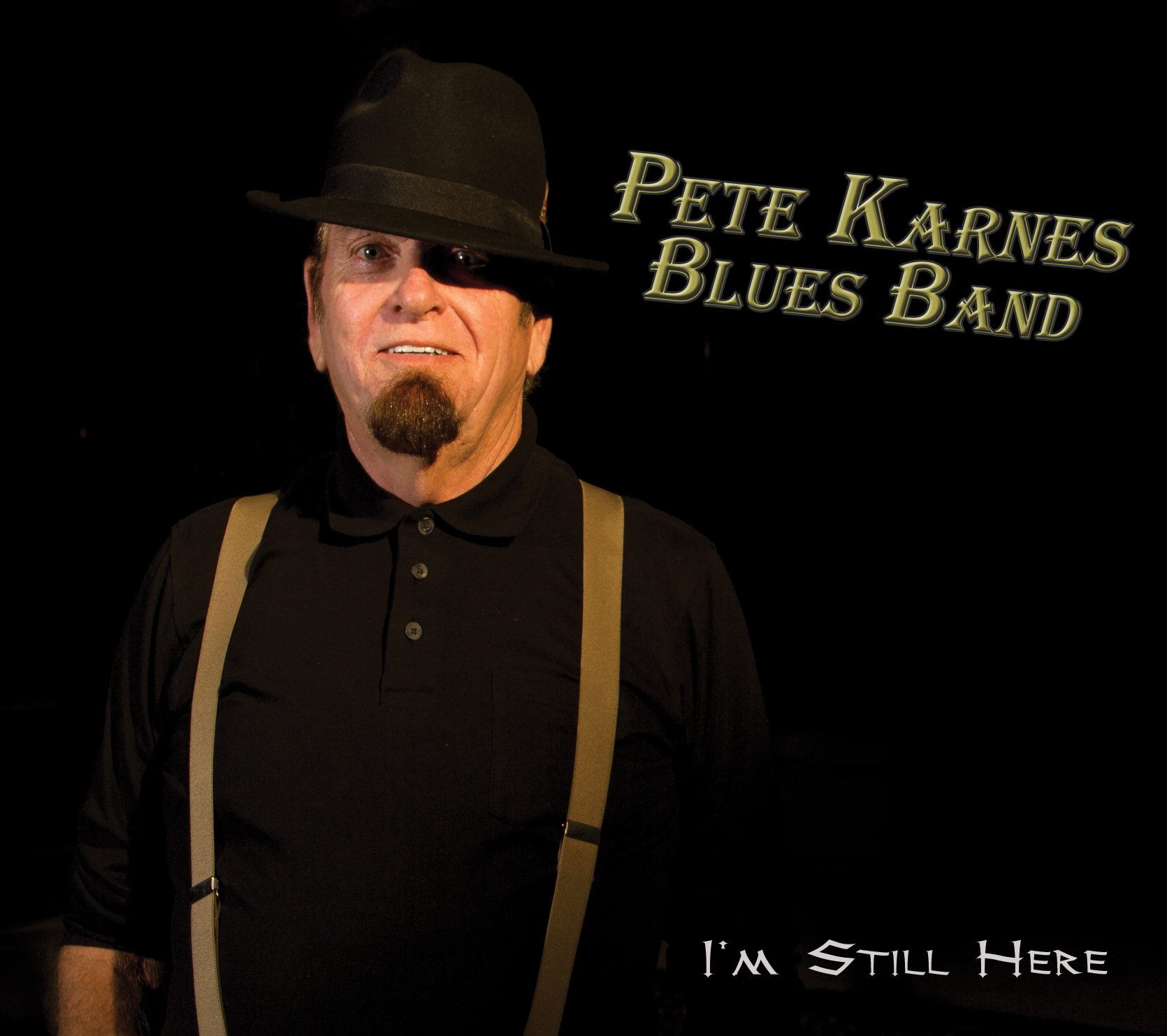 Pete Karnes is a blues harp player, comitted to the Chicago Blues, member of the Blues Hall of Fame and long years in the business. Born in Pigget (Arkansas ), grew up in Ann Arbor (Michigan). As a teenager he moved to Detroit.

Pete’s family was Blues affine. He started his professional career as a musician in the 60s. Lightning Slim , Carey Bell, and Big Walter Horten promoted him. He played with B.B. King, Big Walter Horton, Willie Dixon, John Lee Hooker, Robert Lockwood, JB Hutto, Lightning Slim and Charlie Musselwhite and many other Blues greats . Mid-eighties, he ended his music career to devote himself to the family. The late nineties he became seriously ill, but since 2006 has been active again.
Now he has recorded a new album <I'm still here>. It is one of the albums you like to listen, to listen a second time and suddenly you realize that it is often on the turntable. This is possible if a musician plays in the certainty that he really can and no one has to prove anything more. Pete Karnes does not require twenty Harps to play. I suppose, that he has the pieces mostly played with one instrument. There is no demonstration of electronic overkill - a musician, his harp, a microphone and his voice must meet - and they do fully . Pete’s warm, resonant voice fits perfectly to the songs.

The same is true for the band. Experienced musicians play the blues no frills clear, straight and with full commitment. Pete Karnes and the band harmonize, you realize they have been playing together a long time.

The songs were all written by Pete Karnes and lead through some styles of blues focused on Chicago Blues. The opener <I love my Baby> goes from great, Pete Karnes would then also like to <Play with your Poodle> (which he probably thinks so?) . <South Of the Boarder> is a great played instrumental (it sounds a little like la Cucaracha) , which makes circling the hips of Senoritas , <Boogie Time> also goes the opposite sex in the legs.

The album is varied and timeless. I say this to the opinion of a man that certainly can tell a lot about the blues : < So, if you like straight ahead , no-nonsense , blue-collar , low down blues harp you'll enjoy Pete's harp and vocals on this recording like I do. The latin instrumental ... Reminded me a lot of Big Walter. > Charlie Musselwhite Thick buying tip for those who like a timeless, no-frills blues album!
Second Chance to Play the Blues

by THE BLUES STALKER

One of the true joys of being “the Blues Stalker” is rediscovering some of the great blues artists that played with some of the late great blues masters from the 60’s and 70’s and listening to the stories they can share of those experiences. Such is the case recently when I had the opportunity to sit down with Pete Karnes, one of the most talented harp masters around. Pete slipped under the radar for the past two decades dealing with personal tragedies but is back with a vengeance and wants to share his love of the music.  Pete was born in Piggett, Arkansas but grew up in Ann Arbor, Michigan when his family moved there for his dad to work in the growing automobile industry in Detroit. Musical talent was abundant in his family as his five brothers and one sister all played instruments and he loved blues, his mother’s music.

At age 15, he rode to Detroit and began to hang out there and listen to all of the blues cats. Pete claimed it was safe because of the numbers rackets present; no one wanted any trouble with the police.   As he tells it:  ”I was playing with my own band and started doing parties and things like that in the late 60’s, not even thinking of playing for a living. Then Guitar Johnny called me and said he was supposed to play with Lightnin’ Slim but he had a chance to record with Big Walter Horton and wanted me to cover it for him. It was at the Blind Pig in Ann Arbor, Michigan (the same folks that started Blind Pig Records) so I took the gig and that really was the start of my professional career. After that I did a few more gigs with Slim. Slim had a few hit songs on the chitlin’ radio shows with a song called “G.I. Blues” and a few more—he was the kingpin of the Detroit area at that time.  After playing with Slim, it opened doors for us and my band started playing in the good clubs. We backed up guys like Boogie Woogie Red and other local blues cats and this was when I met the late Carey Bell. Any time he was in town he would stay at Guitar Johnny’s house or mine. He taught me third position and he learned it from Big Walter. A lot of players can’t hear that position but I could always hear it. I never had any trouble. Carey opened for Big Walter and turned me onto him. Well, Big Walter came to town and I met him and we became lifelong friends, we played together and traveled together.

Then in the mid-70’s myself and two guitar players moved to Portland, Oregon. That is where things really started to roll for us. We started playing five to seven nights a week in the Northwest. We became one of the biggest draw bands on the west coast. In the late 70’s my band backed up John Lee Hooker up in Portland and it went so good that we backed John many times. In 1975 I recorded my first LP ”Shot and a Back” and in 1978 I recorded “Dark of the Woods” on a London label, P.B.R. Records and it sold well in Europe. In 1979 I recorded a double live LP with John Lee Hooker called “the Cream” which was nominated for a Grammy.”   John Lee called Pete “one of the best harmonica players I have heard in a long time. The way he boogies reminds me of Al Wilson.”

Pete then started bringing friends out west from Chicago –J.B. Hutto (5 times), Robert Lockwood, Jr., Johnny Shines, Big Walter.”  I booked west coast tours. At one of these tours George Thorogood came to see J.B. and introduced himself, later we did two shows with him. We did a west coast tour with Electric Flag, and Mike Bloomfield and I became good friends. We did a west coast tour with B.B. King and Canned Heat. About this time I started bringing up Charlie Musselwhite from the Bay area. That is when I was asked to appear in the first battle of the harmonicas in San Francisco put on by Tom Mazzolini. It was Rod Piazza and Charlie Musselwhite and me and my band. We opened a lot more shows. I just can’t remember it all. I got drinking and doing drugs in the mid-80’s and my wife told me it was the music or my family so I quit playing.”

In 1999 Pete’s wife of over thirty years was diagnosed with brain cancer and was told by West Coast doctors at age 54 to just go home, there was no hope. A close friend knew of a doctor at Shands (U of Fla teaching hospital) in Gainesville who specialized in this type of brain tumor. In 1999, they moved to Bell, Florida, where his aunt and uncle resided in order to be near the hospital. The tumor was removed but sadly, reappeared in other organs two years later and he buried the love of his life and remained in Florida living the blues.  To attempt to escape his grief, in 2004 Pete took up long haul trucking and after trying to beg out of a haul due to not feeling well but due to circumstances at the time, he relented and ended up in St. Paul in a very bad accident. “I was dead for 9 minutes, in a coma for 5 weeks, and in a hospital for 5 months.” He advised never to sign an organ donor card because they didn’t expect him to live when he flat-lined, so they just shoved everything in and put mesh to hold it together until harvest time. Consequently, just recently ten hernias from the accident had to be repaired.

With a desire still to play, “in 2006, I started sitting in at area blues jams and started my own band again. In 2010 my guitar player, Phil Coultas, flew out to Portland, Oregon for a Pete Karnes Blues Reunion and it was great. My lead guitar player, Rick Randlett and I have done some gigs as a two piece. I just wanted to play in a band so here we are together. I have had two good offers to go back on the road but I just want to do it for the music that I love.”  You have to love an artist who once when traveling with the late Willie Dixon and was dealing with a club owner that didn’t want to pay after the gig, saying after all ‘you got good exposure and that should be enough.’ Whereby, Pete promptly unzipped his pants and said, ”you want exposure, I’ll show you exposure” and Willie fell down, he laughed so hard. Oh the stories… Get to know this guy and his talent… there is a reason that he came back from the dead to continue to play the blues.