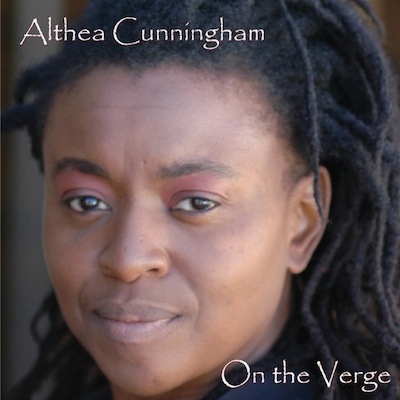 With an Applied Theatre Arts Diploma (Grant MacEwan University) and a Bachelor of Fine and Performing Arts Degree (Nappy Roots Productions) this cross disciplinary artist aims to be at the forefront of an emerging trend to; blend arts forms, process, stories, healing and culture to create sustainability in the arts while also imprinting knowledge and a desired passion for generations to come. As an educator I have taught both youth and adults across Western Canada chosen credits include; private vocal lessons for Nappy Roots Productions and The Arts Connection, musical theatre classes/ camps for The Arts Connection and One Dance Creative Arts Centre and also as a writing instructor for The Writers Guild of Alberta.

Althea Cunningham is a Canadian cross disciplinary artist who works as a; musician, educator, writer and producer and she has been described as a powerhouse performer with an astounding stage presence. In her spare time she hangs upside down in trees and when the blood rushes to her head she crafts poignant songs about love and social issues. Often you'll find her playing rhythm on most things in sight including her mother's behind. On the Verge, her 2010 EP release is rooted in subgenres of jazz including neo soul,classic soul, R& B and reggae while still exploring a fresh contemporary sound for the 21 st century. This EP garnered international airplay and featured artists spots on several radio stations; Black Soul Rhythms Radio, Bowl of Soul, Soultracks, Time Trippin Radio, CBC Radio, TransCanada Alberta Backstage Series,Coop Radio, and Earshot National Campus Radio. Other related media interviews include; CKUA, The Edmonton Journal, and Big Music. Popular on the Western Canadian scene often playing to audiences of 100 plus people this emerging artist has sold out venues.

Primarily a stage actor she is accomplished and versatile in the roles she has played and live theatre has been intrinsic to development and choices as a creative entity. Selected theatre credits include; Suessical (Western Canada Theatre), Poetry In Motion (National Ice Theatre of Canada), The Miracle Worker (Theatre Calgary),Cat on a Hot Tin Roof (Citadel Theatre), To Kill A Mockingbird (Citadel/ Manitoba Theatre Centre), Are There Yet? (Concrete Theatre), The Flying Tortoise (Fringe Theatre Adventures) and three seasons with The Edmonton Symphony Orchestra in The Twins and The Monster. Film and television credits include work with Tooth Fairy Productions, Farewell Atlantis, The L Word season 6 (Coast Mountain Productions), Travelling Films and Mentors Television.