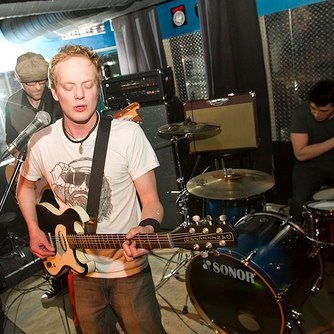 Ground Level Falcons were formed in late 2011.
Each of the members were on hiatus' from there respective projects - Matt, Adrian and Brendan of Vox Humana and Greg of Axiomatik.
The guys from Vox, in the off season, were fortunate to get a call accepting them for the 10k20 Grant from Rawlco Radio that they had applied for a few years ago.
This put them in a weird spot - no actual band or songs but one hell of an opportunity!
Enter Greg. The rest is history!
GLF recorded and mastered there first LP at Sound Extractor under the wonderfully talented Stew Kirkwood.
It is a very personal and powerful 11 song offering full of a multitude of influences and soundscapes.
Matt plays the baritone guitar on this project which lends a different heavier, moodier guitar sound while Greg and Brendan hold down the groove and Adrian donates the ear candy and helps sell the changes with keyboards and lead guitar.
Ground Level Falcons are coming out of the gate hard and heavy and look forward to promote and share there brand with as many people as they can as soon as they can!