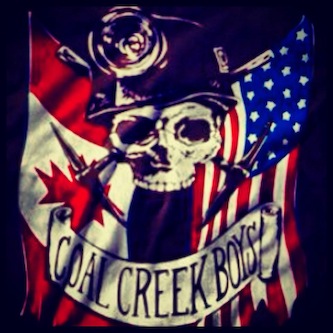 The Coal Creek Boys are not Country Music by today's standards in any way. The Boys can be placed into categories of Red Dirt, Rock, Outlaw - even Alternative Indie Folk - yet they are in no way limited to these. John Smith (lead vocals and guitars) writes music focusing on North America's historical events and performs with the band with as much authenticity as possible. The band is a direct reflection of their locale, Southern Alberta and Eastern British Columbia. Both Smith and Dino Scavo (bass, accordion, mandolin) were raised in coal mining country and relate with the Southern US, bearing the same hardworking mentality of these coal mining communities, as well as deep roots in family tradition.

With regular Radio Air Play all Across Western Canada and the United States, 2014 is an exciting year for John Smith and the Boys. The Coal Creek Boys have performed over 500 shows and can be found on festival stages from BC to Saskatchewan this summer. Veterans of some of Canada’s best showcases, venues And Festivals, Including The 2013 Calgary Folk Festival. The Coal Creek Boys have surpassed 77,000 sales of their two studio albums, Hard At It In Old Town (CD & Digital), and their latest release, Rose Town (LP, CD, & Digital). This growth in sales has ignited bookings for US tours and a highly anticipated solo EP from John Smith. In addition to US dates this fall, the Coal Creek Boys' long-awaited documentary is set to be released by the end of the year.

Keep up on the latest with John Smith & the Coal Creek Boys online at www.coalcreekboys.com, here on facebook, or follow John Smith (@coalcreekboys) on Instagram for a more behind-the-scenes look!