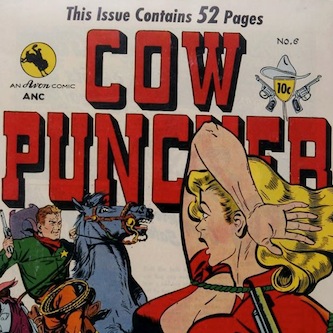 Audiences have long known that Cowpuncher offer up one of the most energetic parties around. Now the five-piece Calgary-based band is ready to release Ghost Notes, its third full-length album, and have big plans to spread the word.

Formed as a loose collective in 2009, Cowpuncher began under the guidance of singer/guitarist Matt Olah, who wanted a vehicle for his country-flavoured rock songs. Despite its revolving door membership, the group quickly gained a reputation for its sweaty, uninhibited live shows, impressing tried-and-true rockers, folkies, and metalheads alike. After releasing 2010’s Brown Album and 2011’s Call Me When You’re Single, the band pared down its membership from seven to five players, to what they call their “Commando Unit,” a tighter, leaner version. With the permanent line-up poached from a wide array of local bands, Ghost Notes represents a new sense of focus and commitment — a clearer vision, more thoughtful songwriting, and a keen determination to take on audiences from far and wide.

Guided by Pilot Audio’s Robbie Josh Gwilliam and his mobile recording truck, Cowpuncher recorded Ghost Notes in a series of creative recording spaces including old warehouses in Calgary and the Masonic Hall in Nanton, Alberta. The band recorded the disc over several months to accommodate its busy live schedule and constant output of new songs (three new songs were actually added after the band thought it had put the album to bed — they were just too good to leave on the shelf). The album kicks off with the anthemic “Raised on Rock ‘n’ Roll,” one of the band’s signature live tunes, and from there, the band weaves its way through its strongest songs to date, ranging from full-on rock stompers to a selection of laid-back heart-breakers.

“The band went in its own direction and shed off this Calgary country Stampede thing — although there are still elements of that,” Olah says. “We just started writing songs with a different approach.” Whereas Olah used to be sole songwriter, the band now takes a more collaborative approach with the whole group filling in Olah’s idea (and former bass player Harley Hoeft contributing a tune of his own). The band has also moved away from the genre-specific roots sound of its beginnings and lets the songs come together in a more natural way. Olah’s cleverly gritty lyrics are brought to life by the band’s keen harmonies and rollicking musicianship.

That focus and evolving approach doesn’t mean Cowpuncher has ditched its outlaw roots or the promise to treat audiences to a party every time it hits the stage. Olah steers the ship, whipping the crowd into a frenzy with his maniacal and often sneering banter and daredevil antics (once landing himself in the hospital with a concussion and broken and bruised ribs!) — leaving the audience pumping their fists and stage managers scratching their heads. The rest of the band swaggers and struts its way through Cowpuncher’s intense set that crosses over from punk and indie rock influences as well as a little bit of raw cowboy soul. Call it roots rock, call it Western grunge — but don’t assume you know what Cowpuncher is all about until you give Ghost Notes a listen and experience one of the band’s raucous live shows.

“We’re trying to show people what Western Canada has to offer,” says guitarist Ryan Kelly. “But beyond that, we’re here to take over. We’re coming for your city and we’re going to put on an incredible show.”