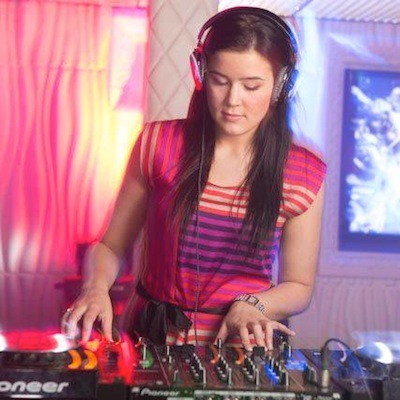 Originating from Edmonton, Alberta, Michelle Derewonko has invaded the EDM scene with high energy and a passion for electronic music. She began learning to DJ at age 19 in 2010, spinning in various small clubs in Edmonton. Playing mostly electro with strong, driving bass lines, she was beginning to be known as a the new girl in town throwing down heavy beats. After some time, Michelle started discovering a great appreciation for other genres of EDM, such as breakbeats, moombahton, drum & bass, trap & many others.
Today, she can be seen spinning anything from electro house, breakbeats, glitchhop and funk to drum & bass. She is a genre juggernaut – playfully jumping from sound to sound. Her sets are heavy hitters – guaranteed to get your booty moving on the dance floor. She loves to incorporates heavy, high energy electro with melodic vocals and various breakbeat mashups, while constantly keeping her dance floor on their toes with surprise genre changes. She uses Ableton Live to produce her own bootlegs, remixes, mashups and original tracks. As a classically trained musician, Michelle has a great understanding for music theory, structure and feel, as she is an experienced piano player and drummer.
Her first residencies were at Fluid Lounge and Red Square Vodka House. It was there that she refined her skills as a DJ and began being more and more submerged into the world of electronic dance music. As her passion grew, she began a new residency at The Treasury Vodka Bar and Eatery. It was then that she had her first CD releases in the summer of 2012. She had one release at Suite 69 on August 31, 2012 and a second a week later at her residency, The Treasury, on September 7th 2012. Since then, she has been a resident at Suite 69 for rockstar tuesdays until October 2013.
Today, Michelle is resident at Club XO and at The Y AfterHours on Friday nights. Dance lovers can catch her unique sound several times a week. Outside of her residencies, Michelle can be seen playing numerous guest spots at various other venues, including: Twist Ultra Lounge, Level 2 Lounge, MiXX Dance club, The WareHouse Nightclub and many others. During the summers, Michelle can be found performing at various music festivals, such as the Mad Hatter (Alberta) and Bass Junction (Alberta).