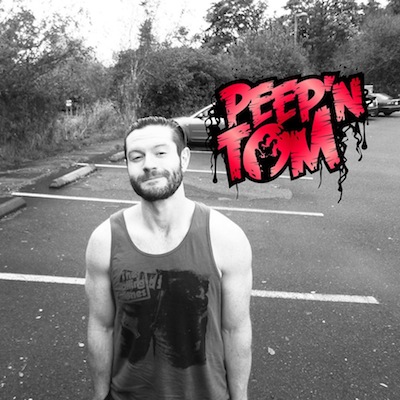 On a cold rainy night in Ireland, a man, who appeared to be the owner of “Lucky Charms Cereal”, seduced a young woman into a night of debauchery. Little did the woman know, the man was actually a leprechaun who pretended to work for Lucky Charms as a way to sleep with girls. Nine months later, in the middle of a Riverdance battle, Peep’n ToM was blasted into existence!

Being born in the middle of a Riverdance battle gave Peep’n the incredible power to create percussive patterns and ridiculous melodies using only his legs, while keeping his upper body completely still. Many people were jealous, and terrified, of this incredible ability. Naturally, Tom had to disappear from society.

After several years of solitude, living on only what he could lure in with the deadly percussive patterns he made with his feet, and learning everything there is to know about sound design from Magic School Bus YouTube videos, Tom decided it was time to expose the world, once again, to Peep’n ToM.

Upon his return, Record labels and club owners became immediately receptive to the “Don’t ask, Don’t Care” attitude that is reflected in his music. This, coincidentally, was also how Peep’n ToM was named!

Peep’n ToM holds a residency in one of the hottest electronic nightclub, and afterhours in Western Canada. He is consistently ready to show the dance floor what’s up with his trusted iPod and RCA to headphone jack cable.

Keep your eye, and ear out for this fellow! (Specifically when you are alone, and/or undressing!)