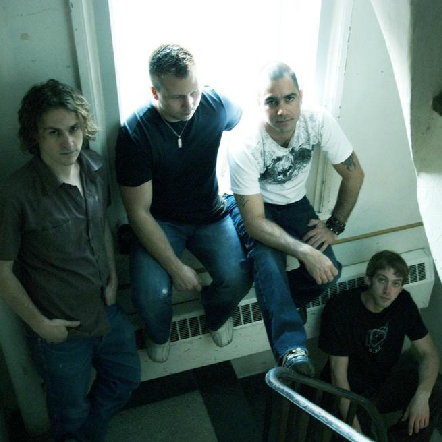 Pascal was born and raised in the small coastal village of Maisonnette, New Brunswick where he grew up participating in music of all styles from folksong to thrash metal. In 2001 he moved to Edmonton in search of work and jammed with various bands prior to joining Peribothra in late 2007.proud Acadien, Pascal continues to boldly celebrate his roots and enjoy his seafood, even while stranded on the prairies.

Casey was raised by hippies outside the small town of Tofield, Alberta. He was a founding member of the math metal band Leto which recorded two albums and dominated the Edmonton metal scene for several years, earning opening spots for Headstones, Nevermore, Into Eternity, and Social Code. Casey approaches the guitar as if painting with sound, saturating Peribothra's music with his direct and emotional style. His hope is that Peribothra's music will resonate with others as strongly as it does within him.

Ian grew up on an acreage near Sherwood Park, Alberta after moving from Toronto in 1990. He was a founding member of Leto along side Casey, but parted ways with the band prior to the recording of their second album. While completing his Bachelor of Music degree in Composition & Theory at the University of Alberta it became clear to him that rules are for those without imagination. Ian adheres to a strict vegan lifestyle citing ethical and environmental concerns as his primary motivators.

Rai hails from Santiago, Chile where he studied music and life. He joined Peribothra soon after moving to Canada in 2009, and is currently pursuing a Master of Music degree at the University of Albera focusing on Music Composition. His mind is scattered like the geography of his beloved homeland, and even though he now calls Canada home, Rai's heart remains with South America, its people, and its music.

(drumkit). Singers and bassists came and went during those early days, but the line-up stabilized in 2007 when Pascal Chiasson (bass) was recruited and the band gigged under the name PRND. In 2009, after a short and decisive search for a new vocalist, Raimundo Gonzalez (voice) solidified the band’s line-up. With fresh blood and a new course charted, the band adopted the name Peribothra and resumed gigging in 2010. Peribothra released their first album (self-titled) in September 2010 and is working hard to spread their music around the world. Even while relentlessly promoting their first born, Peribothra is fervently composing new material for an ambitious second album.