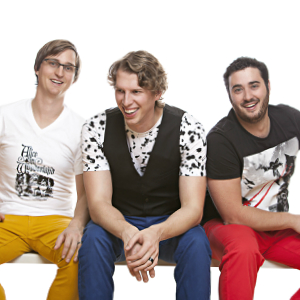 White Lightning is an Edmonton based three-piece modern rock band, likened to The Strokes, KC & the Sunshine Band, and Phoenix. Their sound is an eclectic mixture of Indie Rock with Brit Rock influence, distinguished by solid three-part harmonies and unique tones. Dedicated to creating solid music in both recorded and live settings, White Lightning has worked hard for the last 5 years, gaining momentum in the local scene. In the last year the band has written a wealth of new material and recorded an EP with renowned producer Howard Redekopp (Tegan and Sara, Mother Mother, Said The Whale) that will be released early 2015.

Along with the excitement of White Lightning’s new EP and following album, there is a lot of buzz around their live show. A typical show for WL is filled with kazoos, trashcans, beatboxing, engaging musical performances and a whole lot of dancing. They have been nominated for 5 EMA’s, won multiple ‘battle of the bands’, and performed with acts such as Sublime, CCR and Ten Second Epic. They have earned a reputation among Canadian music lovers as some of the most entertaining performers in the West.

In 2010 they were featured as Band of the Month on Sonic 102.9fm, with their debut single Satisfaction charting strong on Canadian rock charts. Sonic’s Music Director, Adam Thompson affirmed “White Lightning is a band that’s doing everything right. They’re incredible performers, songwriters, and musicians. This is a band that’s on its way up.”

White Lightning will continue to rock and inspire the world with Peace Love and Lightning.