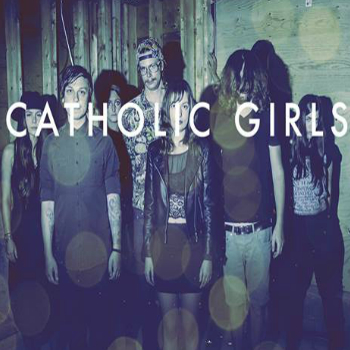 Formed in February of 2013, Catholic Girls is made up of former members of past Calgary bands such as Mount Analogue, The Poly Shores, and The Grim Beat.

Since the bands first show at Commonwealth for the BIG YYC Festival in July of 2013, the four-piece has been playing countless shows in a variety of venues ranging from laundromats, bars, and houses, to theatres, an abandoned building, and a pizza restaurant.

The bands sound could best be described as synthpunk, with Cian Haley and Ted McCormick currently working with four synthesizers, and singer Erin Jenkins’ vocals being described as “unexpected shifts from sass to blood-curdling banshee queen”.
…duelling synthesizers mingle with the guitar in providing texture as much as melody… Galen Colbeck’s drums pound with nigh-industrial depth…”, FFWD Weekly