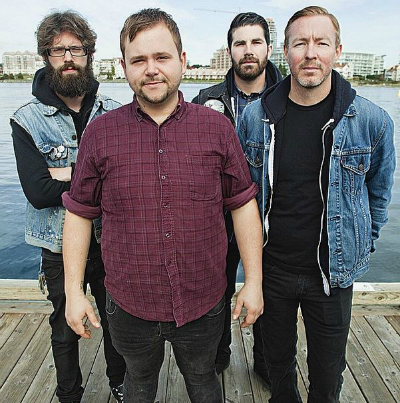 Acres of Lions is a pop-rock band based in Victoria, Canada featuring ex-touring members of the seminal American punk band Against Me!. Their music is lyrically-driven rock, influenced by bands such as The Get Up Kids, Jimmy Eat World, The Weakerthans, Alkaline Trio, and Saves The Day.

The band received critical acclaim for their 2009 debut full-length album, Working, released on Cordova Bay Records. Exclaim! Magazine reported “this is definitely a band to keep on the radar”. Acres Of Lions follow up sophomore album, released on Cordova Bay Records in 2011, took the band’s sound in a more pop-influenced direction, and was met with more commercial success. The first single, Reaction, was mixed by legendary engineer Mike Fraser (AC/DC, Mother Mother, Franz Ferdinand) and charted at #19 on the Canadian alternative rock charts.

2011 was also a big year for Acres Of Lions, as they were selected by Music BC as one of the ‘Top 20 Bands in BC’ for the Peak Performance Project. Other highlights included music placements on television programs Degrassi and Majority Rules, and a cross-Canada tour supporting JUNO nominated indie-rockers Ten Second Epic.

In 2012, the band attracted international attention, placing third in the pop category of the International Songwriting Competition and releasing their albums though Bullion Records in Japan, and Fierce Panda Records in Europe. They also took on an impressive 250 date touring schedule, including: two cross Canada tours, two tours to the UK, performances at Canadian Music Week and Edgefest, opening slots for Hedley, and more than 6 months on the road with a provincial government career building initiative performing for youth around British Columbia.

As of 2014, the band is in the studio writing new material for what will become their fourth full-length album.

For a complete list of tour dates, please visit the TOUR section.