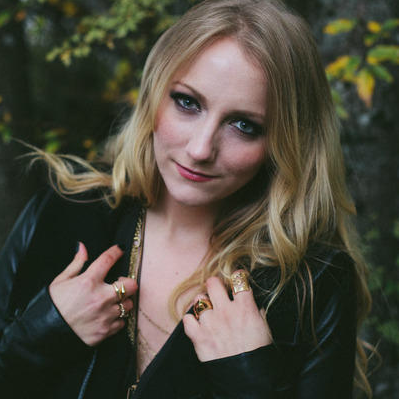 My parents once told me that as a small child I would yell and squeal for no other reason than just the sheer joy of using my voice. I loved creating sounds. Nothing has changed (well, not nothing) but I have learned a more pleasant way of expressing myself using the same tools.
– Steph Macpherson

After more than a decade of voice instruction, several years of piano and guitar lessons, Steph set out to take a real crack at the bat, armed with an E.P. and absolutely no idea what to expect.

In the fall of 2009, she embarked on her first tour of Canada with folk musician Zachary Lucky. The tour was an ambitious endeavor of 30 shows in 33 days. Shortly thereafter, fueled by the success of the trip, she relocated from her home in Victoria, British Columbia, to Vancouver, where she applied for as many musical competitions as she could find.

In what felt like the same breath, Steph was selected through an online “talent search” to play Lilith Fair 2010, opening for huge acts like Sarah McLachlan, Colbie Caillat, Erykah Badu, and Sheryl Crow, as well as being selected to participate in Vancouver’s Peak Performance Project, where she competed for $100,500 in grant funding. While she did not receive a cash prize, the Peak Performance Project included a music industry boot camp, which proved to be an invaluable experience for her. Steph came out of the competition armed with advice from numerous successful music industry professionals, though she admits, “I had no idea, going into it, how much I had to learn, the people I needed to meet, and the growth and vision I needed to work toward.”

Steph took 2011 to tour, play a few key festivals, and write and record a full-length album that reflected her personal and musical growth. She released Bells & Whistles in Canada on April 17, 2012 with Cordova Bay Records. Just prior to the album’s release The Zone 91.3 FM named her their April Band of the Month and in August 2012 Shore 104.3 FM named her the ‘Best of BC’. She received radio and social media support from both stations, and Shore 104.3 awarded her a cash prize of $10,000. Just two weeks later, Steph placed 3rd in the Music BC and Cellar Nightclub's "Voice of the Cellar" Songwriting program.

Amongst all of this outpouring of support, Steph toured across Canada in 2012 and was featured at showcase performances at Canadian Music Week 2012 in Toronto. She added opening for Hannah Georgas, Jon and Roy, Michael Bernard Fitzgerald, and Jeremy Fisher to her repertoire of performances that already included the likes of Jesse Winchester, Leeroy Stagger, Yukon Blonde, and many more. When asked about her experiences so far, Steph says, “I still can’t believe how lucky I am and how much support I receive from so many different sources, in so many different ways. People are continually placing their time, energy, and funding behind me in my efforts, and I am incredibly grateful. That support allows me to keep doing what I love, so life is pretty sweet.“

Steph’s music can now be heard all across CBC Radio 1, 2 and 3, Galaxie Channel, Canadian Indie, and CBC Digital Channels - Adult Alternative & Canadian Songwriter. Her single is being played on a variety of commercial, community, and college stations around Canada and has been receiving attention from American AAA Radio since the release of Bells & Whistles in the US on January 15, 2013 with Cordova Bay Records/Burnside Distribution.

Macpherson’s voice is clear, well-trained and hauntingly beautiful, and her vocal melodies are deadly infectious.
- BC Musician Magazine

The back-porch violin is good and the acoustic guitar pleasant enough, but what makes "Keeping Time" a gorgeous slice of country-folk is Steph Macpherson’s voice. Move over, Be Good Tanyas—there’s a new gun in town.
- Georgia Straight

The one thing that can be said about Steph Macpherson’s music with certitude is that, hands down, it is absolutely beautiful.
- Canadian Music Blog