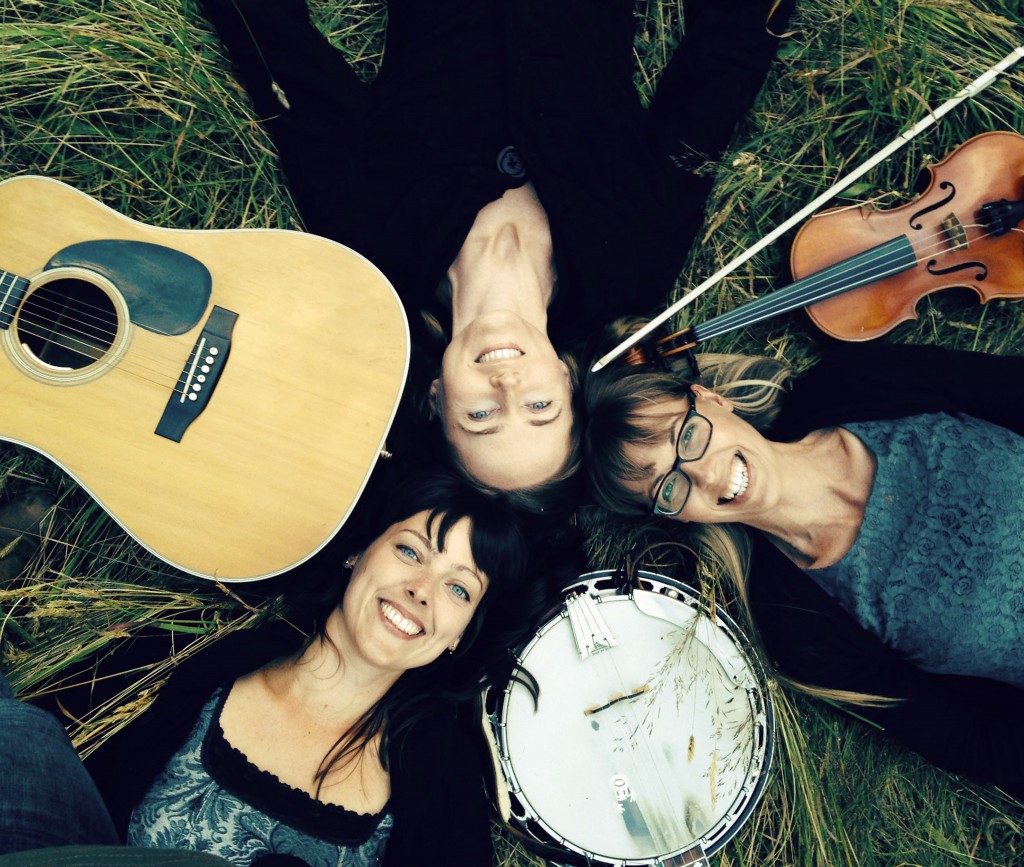 THE SWEET LOWDOWN can take you from a sunny front porch to the outer reaches of the universe. Blending original songwriting and three-part harmonies with an old-time instrumental groove, this award-winning acoustic roots trio from Victoria, B.C. creates a unique yet timeless sound that takes listeners on a pleasurable and memorable journey.

Drawn together by mutual passion for old-time music, hard-driving bluegrass, sweet harmonies and well-wrought songs, The Sweet Lowdown (Amanda Blied-guitar, Shanti Bremer-banjo and Miriam Sonstenes-fiddle) pays homage to its musical roots while simultaneously breaking new ground. Each member contributes to the band’s original repertoire and each has a unique vocal flair as well as impressive instrumental chops.

These are well evident on The Sweet Lowdown’s latest award-winning album, “May,” produced by Adrian Dolan (The Bills, Ruth Moody), mastered by Joby Baker (Cowboy Junkies, The Bills) and released in November 2012. The album features ten original compositions and two traditional songs that demonstrate a wide range of influences, including Irish and Indian music. It earned the trio a nomination for a 2013 Canadian Folk Music Award, and follows on the heels of the band’s highly praised self-titled 2011 album, which received a nomination for “Album of the Year” by the Vancouver Island Music Awards.

Winners of the 2013 “Island Roots Album of the Year” (Vancouver Island Music Awards), Victoria’s 2011 M-Award for “Favorite Roots/World Music Group”, and nominated for “Island Artist of the Year” and “BC-Wide Artist of the Year” (VIMA), The Sweet Lowdown has the ability to play to, draw in, and excite a diverse audience–young and old, lovers of traditional music as well as those new to it.
The past three years has seen the band traveling around North America to share their music and teach their craft, in Canada from Haida Gwaii (Edge of the World Music Festival) to Nova Scotia (Cape Breton Island, Lunenburg Folk Harbor Festival), from northern Saskatchewan (Northern Lights Bluegrass and Old Tyme Camp and Festival) to the Northwest Territories (Folk on The Rocks). Their first US tour in October 2012 took them to California, Iowa and Illinois. Early 2013 included a Home Routes tour of southern Ontario, and summer festivals included Kluane Mountain Bluegrass Festival (Whitehorse, Yukon), Folk On The Rocks (Yellowknife, NWT), Mission Folk Fest (Mission, BC) and Sunshine Music Festival (Powell River, BC). The trio played an official showcase at the Folk Music Ontario conference (formerly OCFF) in October 2013, and did a Western Canadian tour (eastern BC, Alberta, Saskatchewan) in November 2013.

This February, The Sweet Lowdown toured in North Carolina and Virginia, then headed to Kansas City, Missouri for an official showcase at Folk Alliance International. In late March/early April they recorded their third album (to be released in November 2014), showcased at Pacific Contact in Vancouver in April, and then headed straight to the UK for their first European Tour! Summer festivals included Tottenham, Sacajawea and True North Fraser Bluegrass Festivals, and fall tours will include Alberta, BC and North Carolina.

Shanti Bremer grew up in Olympia, Washington, where she began learning bluegrass banjo at the age of 11. After moving to Victoria, BC, Bremer continued to refine her bluegrass sound and also discovered–and became smitten with–clawhammer banjo. Today, she has a busy teaching schedule in both styles and continues to diversify as a banjo player.

Coming to Canada from Germany at the age of nine, Miriam Sonstenes is a classically trained violinist-turned-fiddler. She has played with Victoria groups The Moonshiners, The Yiddish Columbia State Orchestra and Shearwater Bluegrass Band. She is also a sought after violin and fiddle teacher, and has taught at fiddle and bluegrass camps throughout BC and the Northwest Territories.

Amanda Blied, the only Victoria-native, fell in love with old time music in 2000 upon hearing the recordings of Doc Watson and Clarence Ashley. She has since traveled throughout North America tracing the roots of music she loves and she brings to an old time feel to her guitar playing. She sang for years with Victoria’s award-winning Eastern European a capella vocal ensemble, the Balkan Babes.