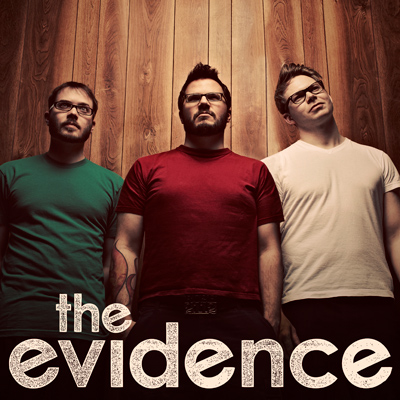 Canadian power trio The Evidence has shown an eerie dedication to their craft since banding together in late 2002. Graduates of the local punk rock scene, the band has nurtured a sound that blends the rocky pop sensibility of alt-punk bands such as Green Day, Bad Religion and the Foo Fighters with the prog-rock detail and grandeur of groups like Rush and Queen.
Erecting their vision out of the wreckage of their high school bands, guitarist scene-mates and chemistry classmates Dean Rud and Tyler Pickering aligned themselves with drummer Casey Lewis and dubbed themselves The Failure. By 2008, The Failure was anything but, selling through pressings of their first two albums and placing videos in rotation on both MuchMusic and MTV Canada. Despite this, change was coming. While the role of fourth- member-bassist was becoming prone to turnover, it was a metamorphosis in The Evidence’s songwriting that got the attention of fans and critics.

When Rud, Pickering, and Lewis set out to write and record their third album together, Polarity, something had changed. Whether it was the long road slogs, broken vans, broken hands, shows for a dozen sweaty kids in mouldy makeshift all-ages venues or simply the upshot of a band collectively transitioning into their late-20’s, the trio realized they had uncovered the marrow of their identity. Recognizing the winds of change, Rud, Pickering, and Lewis chose a new name for the band, and The Evidence was (re-)born.

The Evidence doesn’t fit the mold cast by typical bands. Approaching their craft with an obsessive attention to detail, the band seeks to build a legacy playing the music they love. To that end, Dean Rud started his own record label, Meter Records, to release The Evidence’s albums as well as projects for their peers. Casey Lewis keeps his hand in the business side through his recording studio, Echo Base. Tyler Pickering spends his time on his electronic solo project, The Analogue Kid, and touring with Chixdiggit and the Ramblin’ Ambassadors. It would be easy, with all of these other responsibilities, to get distracted from making music, but as their tenure and talent attest The Evidence are dedicated to their music; bound to their vision and craft as they are to each other.