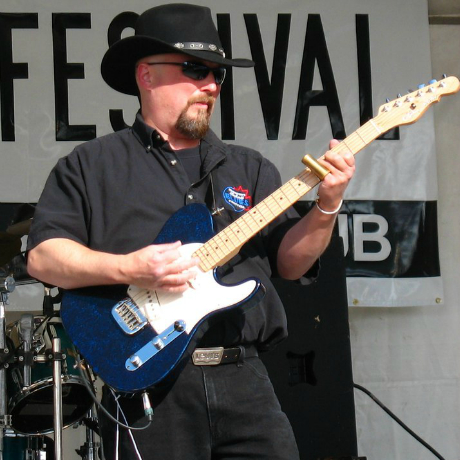 Since first seeing Taj Mahal performing with only a thumb piano on the Ed Sullivan Show when I was merely six years of age, I’ve always had a fascination with performing Blues, Jazz and Roots music. I still remember it like it was yesterday. It hit me that hard.
After performing my first paid gig on drums at the age of fourteen, I performed on bass guitar and drums until the age of twenty when I chose guitar as my main instrument. This lead to me performing and touring throughout the 1980’s in numerous classic rock bands, but when at home I always found myself in my studio immersed in the blues recordings of B.B. King, Muddy Waters, Howlin Wolf, T-Bone Walker and Stevie Ray Vaughan.
Then beginning in 1992, I took my career in a decidedly “bluesier” direction. I performed throughout the 1990’s and well into the 2000’s as bandleader with blues and blues-rock acts like The Acousticats, Nightshift, The River City Rhythm Kings and Mister Lucky as well as a solo artist, modeling myself after such greats as Sonny Terry and Brownie McGhee, Lightnin’ Hopkins, Big Bill Broonzy and John Hammond. During this time a fortuitous meeting in 1994 with Sophie Hunter sparked a long-time collaboration and close friendship. Sophie And The Shufflehounds was formed and have since performed innumerable shows, treating fans to our special brand of “Rn’B-infused blues for your dancin’ shoes”!
Jazz has also played a huge roll in my career. The first real exposure to live jazz was at the age of fourteen, meeting Canadian jazz giant Ed Bickert when I attended a guitar clinic featuring Bickert. Since, Ed Bickert has been a major jazz influence along with Herb Ellis, Wes Montgomery and Joe Pass. I am a life-long fan and student of jazz and swing music, studying and attending numerous clinics and seminars as well as studying jazz under Glenn Gray and music theory under Don Ross. My jazz experience also includes performing with The Budget Big Band And Swing Emporium - a seventeen piece swing orchestra focusing on music written by Woody Herman, Count Basie, Duke Ellington and many others.
Recorded works include being commissioned by film maker Peter Hill to write and record a sound track for his independently released movie “Happy Hour”. I enlisted the help of my best friend and favourite collaborator Sophie Hunter and the rest of The Shufflehounds to be featured on this recording. I have also appeared as a guest musician on other artist’s recordings and have penned and recorded two all-original cd’s with my blues band Mister Lucky. The first of these two releases received national distribution. I have been both honoured and fortunate to have no less than nine of my songs receive radio play with such local and national broadcasters as CJSR, CKUA and CBC . I have since been busily writing and composing. Im looking forward to releasing many of my newly-crafted acoustic original compositions in the very near future!