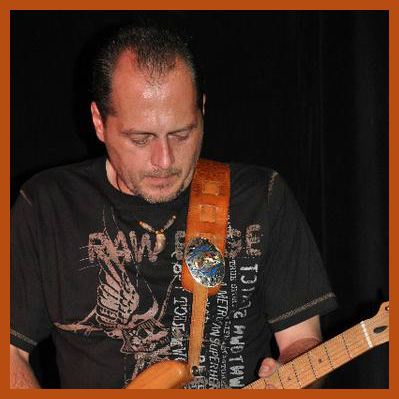 I've Been playing basically since i was a young teen so a little over 30 yrs.

My first influence was my late mother who played lead guitar for country bands in the Greater Toronto area and for a woman in that role in the early 60's was almost unheard of. Towards the mid 70's going through albums i come across mom's albums names like BB King, Howling Wolf ,Muddy Waters Al Green and Wilson Pickett i was instantly hooked.

Soon after mom was taking me to the Free concerts at the Ontario place Forum to see BB King, Buddy Guy & Junior Wells, Albert King and so on. Mom had made some friends in the blues circuit a guy by the name of Buster Benton who at the time was touring with Willie Dixon. On one of their stops in Toronto this Gold Cadillac Eldorodo pulls into our place. Buster Benton, Carey Bell, Laffayett Leak and Willie Dixon pay a visit needing to crash for a day or two while intown.

Little did i know at 10 yrs old that these people were blues legends and God's to some.

I noodled around on Bass and then guitar picking up whatever mom would show me but not much seriouness until SRV became known and lit a fire under my butt to learn more.

Losing both my biggest influences SRV and Mom a month apart gave me my first real understaning what the blues was all about, grabbing any guitar around the house and playing it until the pain would stop or into complete exhaustion where my fingers and hand cramped up and i couldn't play any longer.

Born and raised in The Greater Toronto area i moved to Edmonton Alberta,Canada in 2008 not wasting anytime checking out the open jam circuit and finding a very large Blues community alive and well. I have had the pleasure of watching and playing along side of some of the very best players i believe in all of Canada.