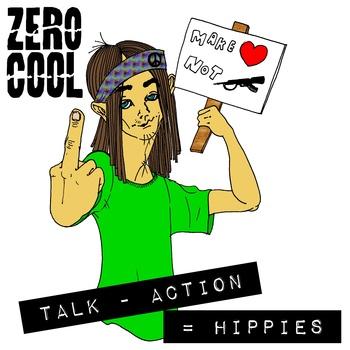 Zero Cool was an idea forged inside the skull of KP, it came to fruition in October of 2007, he posted an add somewhere on line and a spry young buck named Porter was found to be the first drummer. Jim Nowhere offered to play bass for a little while, since he had one and was in the mood for something different. December 13th 2007 marked Zero Cool's first show, they had 4 jams under their belt. Porter exited stage left to never be seen again. Seeing as how they had agreed to play a show on February 23rd 2008 they quickly found a second skin player, J.C. Mike Johnson, and sort of ran him through everything the day before the show. After tear down, and a few hours spent drinking coffee, Mike exited stage right.

Zero Cool once again a two piece, opted to play an acoustic set at Concordia University College's "annual" battle of the bands. it made enough sense that they recorded a 4 track EP entitled "Pretty" and put 7 other songs recorded with a room microphone and call it a day. The audio from this show sounds like it was mixed by a deaf rodent, to quote Jim Nowhere. Not looking to be a folk act, Zero Cool, once again hunted down a new drummer. Pauly TR-606. Pauly didn't hit as hard, played just as fast, and was a bit of a change. KP swapped to bass for a bit, Jim Nowhere took over guitar duties, they recorded the "we're out here" EP, and then phoned Filldo McC because as it turns out they would rather be a 4 piece.

In other bands that would be it.. however, our story just moves on. Grabbing a last minute opening slot for their friends in the Horny Coroners, Zero Cool played their fourth show. Pauly then exited the front of the stage, citing the need to do well in school or something. Zero Cool were bummed out, put up another ad, ignored all responses and found what is to be the final piece of the puzzle, Andy Crackers. Andy stuck it out, put up with being called the new kid. Hit hard, destroys sticks, slays drum kits, and always wants to play everyone else's gear. December 13th 2008 Zero Cool played their one year anniversary show. Andy stuck around, asked why they didn't have shirts, wore fur, and let everyone jump into a drum kit.