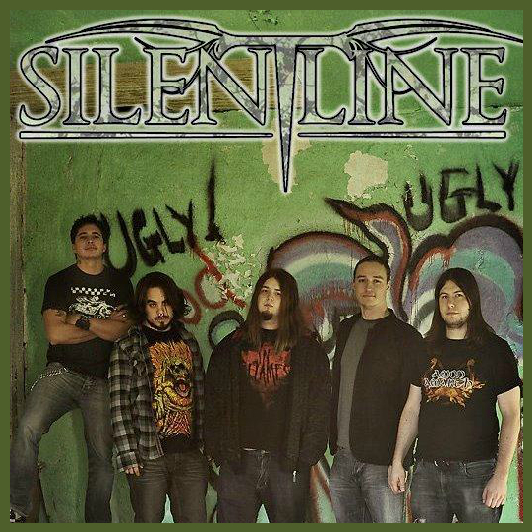 Formed in 2007 by Adam Kallstrom, Mike Burton, and Justin Solowoniuk, Silent Line has its roots in a small town north of Edmonton, Alberta. It was the perfect setting to develop musically as it was, according to guitarist Mike Burton, " A choice between music or becoming an alcoholic or drug addict: there was nothing to do there." Everyone in the band is friendly and down to earth and although some may misunderstand some of lead singer Dave Croteau's more ambiguous jokes, he is no different.

During their highschool years each of them had a chance to bounce around the local band scene: playing drums here and guitar there. Once they left school it was time to seriously concentrate on their career and begin to play in serious venues and build a fan base.

Melodic passages are a prominent feature of their musical style and, combined with the often-used synth tracks and acoustic guitars, is a refreshing change. Melancholy and happy, sorrowful and uplifting, one has as much enjoyment listening to it as it seems they did creating it.

With the acquisition of their bright yellow 15 passenger van and trailer, Silent Line are ready to start the long haul: promotion and touring in support of their music and they are very excite and looking forward to getting out on the road.

In the last year Silent Line has been concentrating on live production: from playing with a click and backing tracks to backdrops, wireless systems, and stage presence. The tour currently being planned in late July, extending into early August, is sure to be a winner and granting them much deserved exposure to new crowds and, hopefully, new fans.

They released their self-produced, recorded andebut album entitled "One Body Blade" in September of 2010 featuring 11 songs with a running time of just over 50 minutes. Within the next few months a new CD will be released featuring songs such as King Nine Will Not Return, and Ens Entium!

Look for them in the future because they are prepared to work hard to succeed, playing in any and all cities, towns, or bars that would wish them to come.