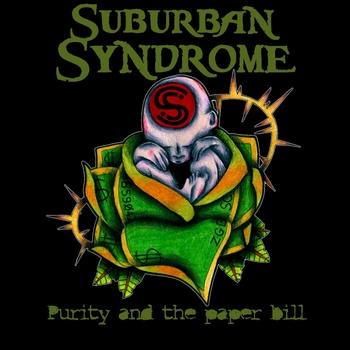 Suburban Syndrome is currently a 4 piece groove metal band hailing from the province of Alberta, Canada. After releasing their self-produced album “Purity and the Paper Bill” for free in October 2010, they have been playing shows in and around their home town of Edmonton. Always gaining recognition for being a different sound then what is currently being offered, they have watched their fan base grow show by show. What started out as a side project to life, has now built itself into a full fledged functioning machine.

In the beginning of 2007, as Zach Wright and Gavin Mader flipped burgers at a local food joint they discovered their mutual interest in heavy music. It didn’t take long for Zach to find a few friends in high school and coordinate some jam sessions. With the inclusion of Sean Goulden and Brad Lange into mix, they had a few songs going in no time. It wasn’t long after that Gavin spoke with his long time friend Craig Westley about joining in the good jams they had going. Thus, Suburban Syndrome was formed as it was for the next 3 years.

These years were spent playing plenty of local shows and locally supporting touring acts such as Ninjaspy. After feeling comfortable with a handful of songs they wanted to make permanent, they began recording in early 2010. While Gavin was in the process of tracking drums in April, guitarist Craig Westley was offered a career opportunity he took in Kelowna, BC. With Craig now gone (on good terms) this left the independent recording process in a bit of limbo as he was slated to be the Recording and Mixing Engineer for the whole process, due to his school of knowledge in Audio Engineering. At this point the band trekked on and Gavin stepped up and took on the role, while rapidly educating himself on the processes involved with recording and mixing. Hard work, dedication and about 6 more months of working at it, they finally had a finished product to be mastered. It was sent to Imperial Mastering and was released almost immediately upon it’s return.

The debut album was released for free on Oct 28th, 2010. Using the online website bandcamp as a medium, they gave fans a download which included 10 tracks, a digital booklet, a band photo, album/track art drawn by James Greenaway, and a speech asking for fans to share the album for free.

The lyrical overtone though out the music has been of frustration with the current apathetic state of the western world. With their music as the podium, the lyrics are heavily charged with social issues such as human over population, Fear mongering by main stream press, and the similarities between the impressions forced upon children by corporate music and religious organizations.

With their first recording journey complete, Suburban Syndrome did not waste anytime heading back to the start line. As they consider replacements on guitar, you will still find them playing live shows, jamming out new tunes, and starting the whole process over again. The future holds no bounds for this band driven by spreading awareness about social issues.