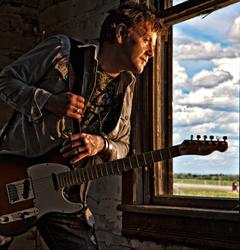 For years, Bobby Cameron’s playing’s been called powerful, lately his songwriting’s been touted as powerful. What this artist has first and foremost is staying power. He does not re-invent himself to suit the current climate, instead Cameron has steadily built a career that started as an ace guitarist in rock bands, to a valued sideman, to frontman, to singer-songwriter.

The passion he dedicates to his career is the same as you’ll witness on stage from this inspired live performer. Whether on his charismatic solo shows or fronting his energetic roots-rock band, it’s obvious Cameron loves what he does and is doing just what he was meant to do, in his career and his life.

His soul is anchored in his Cape Breton upbringing, Cameron brings to his music a riveting mix of styles, running the full gamut from folk and roots right up to blues and rock.

The past few years have seen some exciting chapters in Cameron’s storied career. His collaborating with Jully Black resulted in a song on her Juno award-winning album Revival from 2008. In 2007 he garnered Toronto Exclusive Magazine Awards: “Best Blues Artist "; “Best Blues Song” for ‘Sueanna’; and " Artist of the Year”. From the BMG label he received a platinum sales award for co-writing on Canadian Idol Winner Ryan Malcolm’s “Home” album.

From 2002 to 2006 Cameron was a staff songwriter/producer for Carlin America Music Publishing out of New York. This lead to him placing songs with artists in both the Canadian and American Idol contests.

Cameron considered himself fortunate to be special guest and guitar slinger for the late venerated blues icon ‘Long John Baldry’, and toured with him from 2002 to 2004. His playing with Baldry on the international festival circuit was lauded and complimented by such artists as J J Cale and Bruce Guthro.

His first indie CD was self-titled and produced by Randy Staub (U2, Metallica, Bon Jovi). Cameron’s second album, Drowning on Dry Land, was mixed by celebrated engineer Mike Plotnikoff, (The Cranberries, Bryan Adams, Kiss). His third album, Emotional Drift, was recorded in Nashville by the renowned Miles Wilkinson, and mastered at Sony Studios in New York.

Cameron will be releasing his fourth full-length album late 2010. This project was co-written with John Capek, whose hits include Rod Stewart's “Rhythm of My Heart" and "This”, Dan Hill's "Can't We Try" and Amanda Marshall's "Promises".

Bobby Cameron is a dedicated, multi-dimensional artist; this is demonstrated by the maturity of his continuing commitment to great, timeless music.