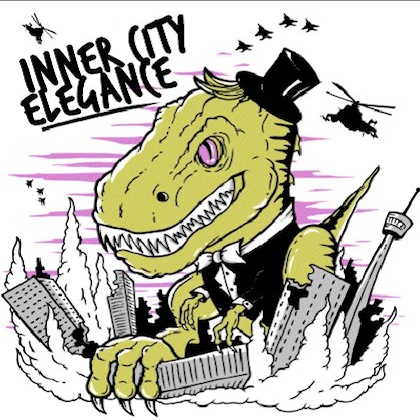 Music happens for a lot of reasons these days. Concerning is the fact that, increasingly less so, the reason is music itself. But sometimes, music just happens. It doesn't come out of a wallet or a magazine, it doesn't come out of opportunity or necessity. And that, is how Inner City Elegance came to be.

The trio, comprised of Vocalist/Guitarist Bruno Rodrigues, Bassist Justin Parsons and Drummer Spencer Kathrens, would need to overcome some geographical barriers prior to their formation, both cross-country and inter-continental. Born and raised on the cold, north Atlantic coast of Newfoundland, Justin moved west at 15 to the oil-rich city of Calgary, Alberta. There he met Spencer and became fast friends through a common disdain for gym class and mutual loathing of high school in general. Although both were budding musicians, they wouldn’t officially join forces musically until spring 2008, at the insistence of the third and final piece to the puzzle.

The hot sun and sprawling beaches of the Brazilian coastline are a dream for any winter-weary northerner. To leave them for the long , bitter winters and perpetual minus temperatures of the Canadian prairies is almost unthinkable. But that is the story of Bruno Rodrigues. Born and raised in the Brazilian mecca of Sao Paulo, Bruno left his homeland for Canada at age 20, having never seen a snowflake in his life. Although an avid guitarist and singer, Bruno figured he was done with music. He would get his education in Canada, get a decent job, and integrate himself with Canadian society. But sometimes, music just happens.

Upon meeting Bruno in university and hearing his previously recorded material, Justin casually suggested forming a band. When their searches for a drummer proved ultimately unsuccessful, Justin recommended a suitable fill-in drummer for the time being. After meeting Spencer at a local radio event and subsequently watching him destroy various items of public property, Bruno knew that they had found their man. Despite commitments to school and other local bands, the trio began jamming in the spring of 2008, and by summertime they were playing shows around town under the moniker “The Fedora”. Before they could realize, they had created something that they would leave all that behind for.

Early 2009 saw a name change and the release of the band’s first EP. Now going by Inner City Elegance, (a reference to the band’s notorious and decrepit house/jamspace, 3801) the trio released “Hot & Dangerous” to rave reviews across the board. Featuring five high-energy tunes blending rock and punk with angular riffs, thick grooves and pop sensibility, “Hot & Dangerous” puzzled listeners and critics trying to lump the band into any particular musical style or movement. Throughout the balance of the year, the band managed to establish a rabid and loyal fanbase, capping it off with a series of sold-out headlining concerts at Calgary’s New Black Centre. It was here that the band cut their teeth, showcasing their explosive live show complete with full-audience sing-alongs, blood, sweat and chipped teeth. The barrier between band and audience disappeared, and Inner City Elegance established themselves as one of Calgary’s favourite up and coming acts.

As 2010 rolled around, the band found themselves the subject of numerous radio features and interviews, and with a strong online presence, they began receiving offers to play all across the country, even in places no band would dare to travel. That spring, fans of the band in Hay River, Northwest Territories created a large Facebook community requesting an Inner City Elegance show in their hometown. In the absence of any kind of guarantee of attendance, the band decided to take a chance and embark on the 17 hour drive to Canada’s northernmost territory. Against all odds, people showed up in droves, as hundreds of kids packed the high school cafeteria too see the previously unheard of band from Calgary. Following their full-throttle 60 minute performance, featuring internet favourites such as “Gasoline” and “Can’t Always” as well as new material such as “Boil My Blood” and “HTYBF”, Inner City Elegance was the talk of the town. The next day, the very same high school cafeteria was flooded with kids sporting Inner City Elegance t-shirts, stickers and pins. The band headed back below the 60th parallel with a brand new fanbase, and memories of an experience that will last the trio a lifetime. In recent months, many similar, petition style Facebook groups have cropped up across the nation, with kids from east to west requesting an Inner City Elegance show in their hometown.

For several months leading up to the Hay River concert, the band began to realize the numerous geographical limitations that came along with being based in Calgary. On July 6th, 2010, not long after their performance at Calgary’s Sled Island Music Festival, the band announced to their fans, friends and family that they would be relocating to Toronto, Ontario. Southern Ontario’s thicker population density and proximity to many major centres would allow the band to reach a much wider audience than ever anticipated. That August, with guitars packed next to mattresses, and drums next to dressers, the band left everything they’ve come to know and love behind, and embarked on their first Canadian tour. Along the way the band secured an opening slot for Canadian recording artists Ill Scarlett, and realized a lifelong dream of playing the Vans Warped Tour. The band earned themselves a slot at the Edmonton date of the notorious travelling punk-rock festival, after being selected in an online battle of the bands, featuring more than 40 000 bands across the continent.

Now settled in Toronto, and with a full-length album and extensive touring planned for 2011, the band is poised to reach more people than ever before. In a music scene ruled by fashion over function, Inner City Elegance serves as a reminder that before expensive stage banners, spaceship-style amplifier rigs, flashing lights and fancy haircuts, you need heart.