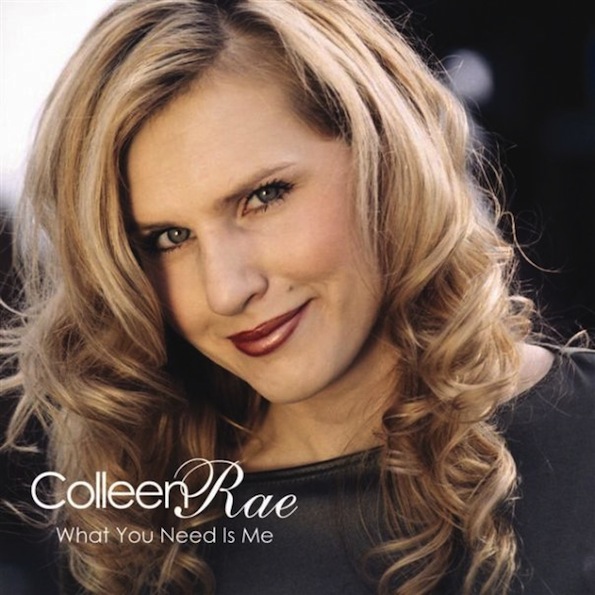 Passion, determination, and natural talent make Colleen Rae a triple threat. Edmonton based country recording artist Colleen Rae released her debut CD What You Need Is Me in 2006. The following year Rae received nominations for her independent CD by the WCMA, TIMA, and CCMA.

“I am totally hands-on with my career. From deciding when and where I will perform to the types of songs I sing, I feel I am being true to what is in my heart.”

Most CD's have three or four good songs and the rest are fillers. When Colleen Rae went in the studio with Canadian producer Louis Sedmak, she wanted each song to count, to be something she'd release. Colleen Rae’s album has yielded seven nationally and internationally charted singles. The title track reached #1 on Alberta radio station CFCW’s Top Canadian Singles. 'Family' crossed over from the country stations to the gospel stations. And 'What Was It' is Colleen Rae’s most successful single to date. In only a few months of its release ‘What Was It” also went #1 on CFCW.

“My goal was to record a traditional country CD, songs with strong messages, lively up tempo pieces for my fans to dance to and modern enough that country radio would embrace it.”

Ten years ago, Colleen joined the band Cornerstone,their uniqueness and versatility has captured audiences throughout Western Canada. Rae’s high-energy live show was noted by Premier Ed Stelmach during her performance at the 2007 CFR Round-up Breakfast “She sure has a wonderful voice, very powerful; we really enjoyed her singing, so much energy!.”

Colleen Rae has built a very loyal fan base from her genuine personality and ability to entertain crowds. Rae has performed at several clubs, festivals, and casinos for over a decade now. She is a natural on stage. Colleen Rae's career highlights include singing at the Winspear, The Brier, Big Valley Jamboree, and performing on a Cruise to Alaska in 2009.

“It is thrilling for me to know how many people I’ve met and how many places I’ve been able to travel to because of my music”.

Colleen Rae is a member of AMIA, CCMA, SAC, and many other music organizations. Her love of “the business” began at age six when Colleen staged shows in the family basement. She’d have homemade posters lining the stairway, she’d sell popcorn and Kool-Aid to her audiences. Colleen Rae is proud to be an independent recording artist.

Music has always been in Colleen’s life. Whether it was family jams around a kitchen table or performing in the Choir, Colleen was always singing. Colleen Rae is a classically trained vocalist. Colleen completed Royal Conservatory of Toronto Piano achieving First Class Honors and she is self taught on guitar. In the early years Colleen Rae performed a tribute to Connie Smith, and was a part of the trio Rocky Mountain Roses. Colleen recalls her love of performing starting as early as elementary school.

“I’d ask the principal if I could sing during the monthly assemblies and I would sing songs by Reba, Madonna and Tiffany.”

Rae is a multi-talented singer, songwriter, musician, and an entertainer. Colleen Rae is currently creating material for an upcoming project. Colleen Rae ran into country music's hottest couple Tim McGraw and Faith Hill during their Soul2Soul tour in Oregon. Colleen wasted no time; she pitched her original song 'Do I Have Your Eyes' to Faith. Colleen Rae has faith that one day her song will be an anthem for those who have been adopted. Colleen Rae has also co-written with renowned songwriters such as Byron Hill, Dennis Charney, Shawn Christian, Rob Heath, Tim Taylor, Rene Boisvert and Wood Newton.

Colleen Rae has what it takes to be successful in the music industry. Colleen Rae's passion, determination, and natural talent is obvious. See it and hear it for yourself.