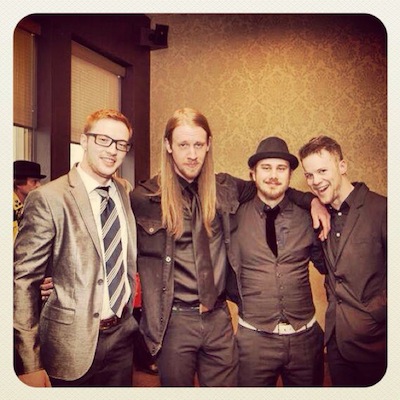 The Apresnos - Don't let their well tailored look fool you. They will rock your a$$ off.

The Apresnos got a break when they beat out 11 other bands in a competition and won the opportunity to open for Edmonton Indie Rockers, Social Code and caught the interest of music industry professionals. In April of 2011 they were invited to open for Our Lady Peace and in the last year they have also shared the stage with Tupelo Honey, Grady (Gordie Johnson of Big Sugar), Ill Scarlett, Sweatshop Union, Flash Lightnin, and Daniel Wesley, which has solidified the group's reputation within the indie rock scene.

In 2010, The Apresnos were selected as one of 72 bands to take part in Alberta's Last Band Standing. This talented group advanced through six rounds of the competition to reach the finals finishing in 3rd place overall gaining the attention of competition judge, producer and Econoline Crush frontman, Trevor Hurst.

The Apresnos have recently completed recording their first EP, produced by Trevor Hurst, at the Juno Award winning MCC Recording studio in Calgary, Alberta with award winning engineer, Johnny Gasparic at the reins.

With their well tailored style (this clean cut group always performs in shirts and ties), and incredible talents The Apresnos have branded themselves with a solid reputation in the rock scene.