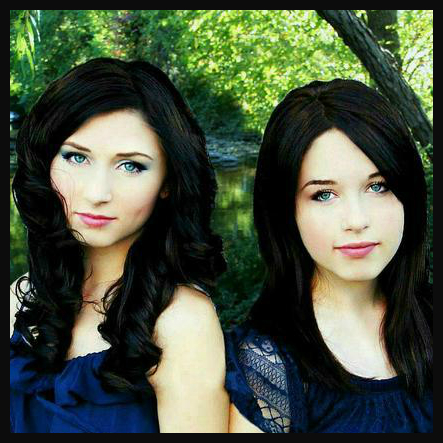 Two sisters Commanding the world with their music..
.
Hi. We're Charlotte and Sarah, and we're sisters... and, we're pretty much best friends too. Just two average girls; goofy and crazy at times, creative, messy, and, sometimes, we just like having the last word. :) We still have the odd fight, and immediately after, we are smiling and laughing because of how silly it all was. We love food, outdoors, friends, God, our family…oh, and this little thing called music. Actually, its become quite a big part of our lives. I guess you could call it our passion, expression, or escape. Yeah. That sounds about right.

The Command Sisters just had the most awesome year! They played 8
gigs in Nashville, including the famed Blue Bird Cafe (one hour all-original Show), Nashville Hootenanny and the Billy Block Show. The girls performed at CBC's national benefit concert for the victim's of the Slave Lake fire (alongside Johnny Reid, George Canyon, Emerson Drive...), at the River Cree.

The Command Sisters were privileged to represent Alberta's youth at a private reception for The Duke and Duchess of Cambridge, Prince William and Kate in July.

Another part of the sisters' musical journey, is to give back and volunteer. Not only do they mentor young aspiring artists in local schools, they are a part of the Stollery Children's Hospital Oncology/Cardiology Ward music program. Charlotte and Sarah volunteer their music with the children on the 'Beach', Teen Room and even sing in the Intensive Care and rooms on the Ward. They also continued with their commitments to sing for the children of Stollery Hospital and fundraisers such as JapanAid, The Huntington Retreat, La Salle Shelter and Kid's Help Phone.

The Edmonton Journal, Songwriters of Canada, Canadian Musician Magazine and Music Now Magazine published their story and Breakfast Television, CBC National TV, TelusTV and CTV were each kind enough to air a bit about the girls' crazy year too.

The Command Sisters are looking forward to playing the MTV Awards (private show) in June and festivals in Canada this summer. The Nashville CD will be released very soon.

"Think of Taylor Swift but there would be two of her and she would have a lot more soul, mixed with the kind of sibling harmonies that would make The Rankins question whether they are truly related, ask them to play pretty much any instrument under the sun and you have The Command Sisters." - Chris Martin, CBC Radio

The Command Sisters have been taking the international music scene by storm all with a unique sound, hair-raising harmonies and a captivating live show. With incredible original material (not only far beyond their years, but totally and completely their own) these two enchanting performers have quickly arrived onto the music scene, and have been stealing hearts everywhere. Charlotte has emerged as one of the foremost songwriters of her generation. As well, Sarah's abilities to solo and improv, on just about any instrument she picks up, has everyone in the music industry sitting up and paying attention.

"Together, their bittersweet harmonies are like a prairie sunset on an August night -- so gorgeous, you'll want to stop what you're doing just to soak it all in. Never heard of them? That's about to change. The Command Sisters are turning ears in Nashville and could be the next big thing to come out of the Edmonton area." - Sandra Sperounes, Edmonton Journal Music Editor

After the girls' start in 2005, they quickly went from backtracks and singing at senior's centres, to picking up multiple instruments, writing their own music, and performing at such venues as opening for Gord Bamford at the Shaw Conference Centre to performing alongside George Canyon, Johnny Reid, Emerson Drive, One More Girl, Pear and The Travelling Mabels at the CBC Concert of Hope Benefit for Slave Lake!

The girls are so excited to share that they have just signed a publishing/production deal with David Malloy of Hoot Owl Music (writer/producer of 41 number one hits) heard the girls and quickly signed them to his Label. "I just think they're magic and I would do anything for them," he says. "There's just something special about them when their voices come together. I love Charlotte's voice and the way Sarah hears harmonies is so unique. They go for what sounds right, what feels right to them." - David Malloy

Charlotte and Sarah's summer was also hi-lighted by a personal invitation from the Provincial Covernment to attend a private reception for His Royal Highness, Prince William and wife, Kate. The girls were so honoured to be a part of this once-in-a-lifetime event. This special day was rounded out by a live national interview with CBC TV.

"The first time I saw The Command Sisters, I was a little stunned. Here were two pixie-like young girls - supposedly newcomers - with the musical skills and stage presence of veteran performers with decades under their belt. The Command Sisters were and are confident, charming, funny ... and most of all ... VERY talented. If you ever have a chance to catch them, do it, because The Command Sisters are going places!" - Ken Regan, General Manager, CKUA Radio Network

And, another part of the sisters' musical journey, is to give back and volunteer. Not only do they mentor young aspiring artists in local schools, they are a part of the Stollery Children's Hospital Oncology/Cardiology Ward music program. Charlotte and Sarah volunteer their music with the children on the 'Beach', Teen Room and even sing in the Intensive Care and rooms on the Ward.

Look for the release of The Command Sister's Nashville CD soon!