Hailing from Edmonton, AB, Big City Supreme formed in 2010 to create music that is fun to play and fun to listen to. Though many musical influences are heard throughout their song catalogue they are most often compared to the Beastie Boys, Red Hot Chili Peppers, and Cage The Elephant. Big City Supreme strives to create catchy rock songs and takes pride in putting on a full out, high energy, fun live rock show that leaves the audience genuinely satisfied and impressed. The music is loud and in your face, but easy enough to rock along and extremely fun.

In the fall of 2011, Big City Supreme hit the studio and recorded their debut EP showcasing three solid tracks. It was well received by the public and has created a yearning for more. Expanding their fan base with every show, Big City Supreme is steadily gaining popularity and just finished recording their first full length album which is expected to be released October 2013. 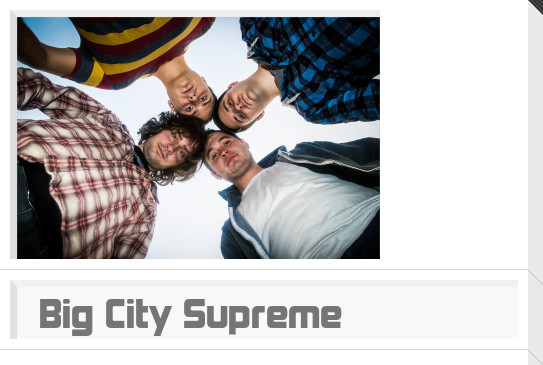