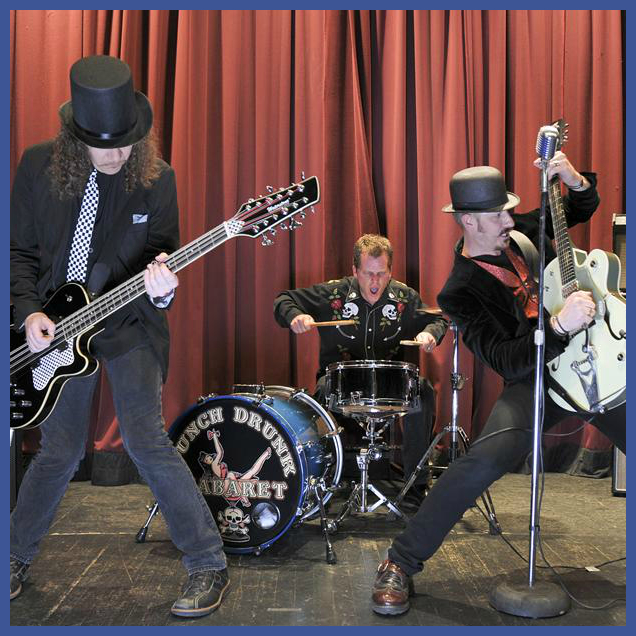 Roots-rockers Punch Drunk Cabaret take the sound of rockabilly, outlaw country and steampunk swing and deliver it with all the energy of AC/DC. Sharply dressed like early century snake oil salesmen, complete with stovepipe pants and bowler hats, the trio is a living, breathing testament that every single show they play is an “event”. From punk rockin’ teens to their grandparents who witnessed the dawn of rock and roll first hand, Punch Drunk Cabaret has been packing dance floors with an incredibly diverse audience that very few bands can attract.

Despite their rockabilly/swing/country traditions, Punch Drunk Cabaret is far from being a quaint nostalgia act. Singer/guitarist Randy Bailer fronts the trio like a home-brewed concoction of equal parts Brian Setzer and Tom Waits, while Terry Sawbones Grant is one of the few 12 string bassists on the planet (yes you read that right…twelve string bass!) The locomotive-like rhythm section is powered by drummer Reverend Robin Eklund with such propulsive energy that it’s impossible for any audience to sit still. From their turn-of-the-century look, to their rockabilly/swing/country sound, Punch Drunk Cabaret put on a signature show like no other.

Although still a new, up-and-coming act, the members are all veterans who have played with established Edmonton area Indie-Rock bands such as Rake and Screwtape Lewis. Collectively they have a truly outstanding resume that includes: supporting high ranking acts like Nickelback, the Tragically Hip, 54-40, and the Northern Pikes, receiving national radio play, touring in the US and Europe, and even appearing in an internationally released movie. But it was when frontman Randy Bailer stumbled upon the curious notion that the same people that love Johnny Cash also tend to like AC/DC, that his writing took on a whole new direction, culminating in Punch Drunk Cabaret.

Produced by award winning engineer Ross Nykiforuk (Sheepdogs/ Northern Pikes), the band released their self titled debut album in early 2012. To highlight the power of their live show they also released a music video for the song Two Brown Bottles of Beer which was shot live at a sold out show at the historic Bailey Theatre in the band’s hometown of Camrose, Alberta. Strictly focusing on live dates for the remainder of the year, upcoming events include Untapped Alberta, the International Beer Festival, South Country Fair, Beaumont Blues Fest and Alberta’s Own Music Festival, proving that Punch Drunk Cabaret is a one-of-a-kind act on the rise.