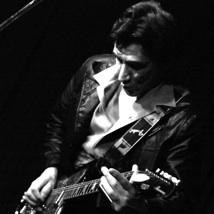 Edmonton blues veteran Jimmy Guiboche has spent almost 2 decades earning a reputation as one of Alberta, Canada's premier blues figures as a sideman, band leader and promoter/producer. He discovered the blues after leaving his chilly, Northern Manitoba home of Snow Lake and moved to the city where he snuck into his first blues bar and was hooked almost instantly. He picked up the guitar at 18 and started to play in local blues bands covering classic, Chicago harp blues where he became familiar with the blues greats like Muddy Waters, Little Walter, Howling Wolf, Earl Hooker, Robert Nighthawk, Magic Sam and also Texas greats like T-Bone Walker, Clarence "Gatemouth" Brown and Freddy King. From there he started to earn spots as a sideman at the local blues establishment, the Commercial Hotel-Blues on Whyte where he played 6 nights at a time with blues artists from the area and all over North America. He also spent several years as the first-call blues guitar player at the Yardbird Suite Jazz Club which doubled as a part-time blues bar where top-notch blues artists were flown in to perform with local backing bands. These experiences helped develop the ability to accompany many different approaches and styles of blues and also cemented a deep sense of the roots of the idiom.

As a sideman and bandleader he has an impressive list of playing credits. He has shared the stage with many blues artists including James Harman, Lazy Lester, Carol Fran, Mojo Buford, Little Mike Markowitz, (the Tornadoes) Larry Garner, Joe Beard, Jimmy Burns and grammy award winner Donald Ray Johnson. He has also produced and promoted a very successful blues series of hall shows along with the Edmonton Blues Society called the Blues Bash Dance Party which became a favourite with local blues fans who flocked out to fill halls and dance to names like James Harman, Little Mike and the Sean Carney Band. His no-frills, no-nonsense approach to the blues has yielded him respect as someone who has learned the blues, internalized the music and can play it back in a style that is both true to the old blues, yet new and refreshing.