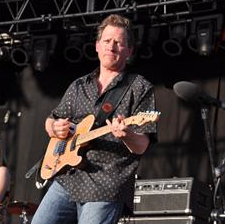 Veteran guitarist, sideman, & session player, Gord Matthews has been a part of the Alberta music scene since the early '80s. He is currently promoting his first solo recording " The Third Best Thing", released in April 2006 and released on Fontana North/Universal Canada through Icon Records.
Just concluding a 10 yr stint with Ian Tysons acoustic trio in Oct. Gord Is now establishing himself as a songwriter and solo performer.

Gord has recently received recognition for his songwriting. He was runner up in the folk category in the 4th anual IAMA awards. for his song "Faith In The Butcher" and his song "Third Best Thing" received honorable mention in the 2008 ISC awards. The ISC finalists were chosen from over 15,000 entrants from around the world.

Presently writing and recording with 2islandgirls and doing preproduction with many artists ,Gord is finding a niche as co -writer/arranger and session guitarist at Homestead Recorders In Edmonton.

Early influences were Johnny Winter and classic rockers Jimmy Page and Billy Gibbons. After joining kd lang in the early 80s, Gord started listening to musicians from the Patsy Cline era, such as Hank Garland and Leon Rhodes (who Gord got to meet at "The Grand Old Opry" and was later invited to his house.
The last 10 years have been largely influenced by the sonic landscapes of Bill Frisell and the craftsmanship of Ian Tyson.

Gord has emerged in his own right as an arranger and has played and sang on Tyson's last three albums. His goal as far as his original music is concerned is to be entertaining, thought provoking and musically pleasing. He is currently working on his next CD, which is tentatively called "The Big One.

First and foremost, though, at the end of this bio: Gord's a family guy with three kids and a great wife; and he knows well enough when to play guitar and when to do the dishes.