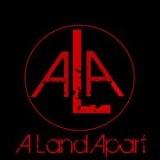 A Land Apart is a progressive metal band from Alberta, Canada. The members of the band are Shay Esposito (vocals), Christian Johnson (guitar), Michael Hackman (piano and keyboard), Spencer Kaplan (guitar), Derek L'Hirondelle (bass), and Ryan Dick (drums). A Land Apart's sound is shaped by both a wide variety of genre influences as well as the different musical approaches of its members, which range from highly technical and musically innovative to basic and emotional. It is the band's melding of these approaches, as well as its emphasis on maintaining quality and diversity in their work which makes them unique. While they love to create and perform their music, they always find time to enjoy the music of others and are constantly inspired to learn and grow musically.

A Land Apart started under the name "Careless Politicians" with Jamie Malbeuf, Christian Johnson, Rodney Dennis, with Graham Plomp on rhythm guitar and Andrea Mchenry on drums. After 4 months, the latter two decided to leave (on good terms). That summer, Michael Hackman was added to the lineup and Jamie took over rhythm guitar. Andrea was replaced by Jeremy Monai, who served as the drummer for ALA until January 2012 (left on good terms). Steve Boddez joined in the spring of 2012, and departed that summer. In mid September, Ryan Kovacs stepped up to the plate and joined the band. In late October of that year Jamie, Rodney, and Ryan departed the band to be replaced by Shay, Spencer, Ryan and Derek in favor of a more prog inspired style.