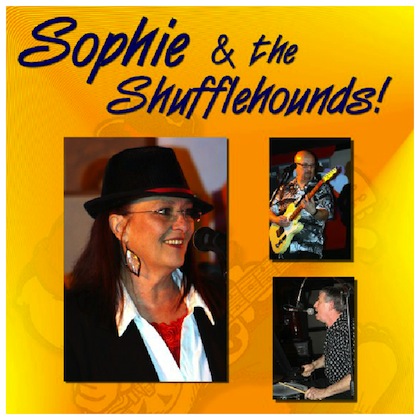 Originally formed in 1994, Sophie And The Shufflehounds performed incessantly on the Central Alberta circuit throughout the mid- 1990's. Edmonton's blues Mecca, The Blues On Whyte was a frequent stop for many performances by the band. The BOW was the setting for a heated battle of the bands where they were awarded second place losing only to Edmonton blues sensations The Rockin' Highliners. In 1996. Film And Video Arts Society Of Alberta (F.A.V.A.) alumnus Peter Hill commissioned Sophie And The Shufflehounds to compose and record the soundtrack for his movie "Happy Hour" which saw it's debut at the Colin Lowe Theatre (Canada Place) in 1997. In 1997 Sophie found it necessary to return to Ontario on family business where she would remain for more than a decade. During this time, Sophie was diagnosed with breast cancer. Armed with her innate indomitable courage and spirit, Sophie triumphed over her affliction and returned to Edmonton more than a decade after her departure, stronger than ever and ready for more. Excited for Sophie's return, all of the original members were contacted and the band picked up where it left off without losing so much as a beat. As Sophie says, "same members, same music, same magic!"
The "Hound Sound" is best described as dance driven rockin' rhythm and blues with Sophie Hunter's sophisticated smokey-smooth yet powerful and soulful vocal delivery serving as the centerpiece. It seems Sophie was born with the innate ability to lull the listener to near bliss or knock 'em off their feet as she so chooses. Backed by the relentless groove provided by the prototypical power trio that are The Shufflehounds, you have a formidable one-two punch. Dust off those high-healed sneakers and explore the dance floor! We'll be aiming the beat at your feet with rhythm and blues for your shoes! Let the good times roll!