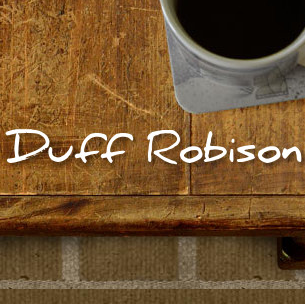 Duff Robison has been entertaining audiences at pubs and special events for over thirty years.
Originally from Saskatchewan, he has been living in Edmonton for the past eighteen years,
and continues to be a perennial favourite in the Edmonton live music scene. Besides hosting
an open stage at Devaney's Irish Pub www.edmontonpubs.com/content/index.php every Wednesday night for the past 3 years, Duff continues to entertain at many local pubs with his own special mix of music aimed at a broad listening audience. Although he is a single entertainer, he presents a full, upbeat sound and provides entertainment for any size room or event.

Duff began his career as an entertainer in 1979, playing at lounges and various venues as a single entertainer in his hometown of Prince Albert, Saskatchewan. In 1981, Duff was a winner of the Sakatchewan Talent Hunt, and as a result spent time that summer touring the province of Saskatchewan. As well, Duff toured North Dakota and Montana that same year with Saskatchewan Tourism promoting travel to his home province. In 1984, he joined with fellow musicians to form the popular band "Hipcheck", a band that played in various venues around Saskatchewan. In the summer of 1986, Hipcheck was selected as the house band at the Saskatchewan Pavilion at Expo '86 in Vancouver. In the fall of 1986 Duff would go on to form a duo called "Those Two Guys" with Hipcheck bandmate Mick Gratias, and the two spent the next six years performing all over Saskatchewan. Just prior to moving to Edmonton in the late fall of 1992, Duff and Mick composed and performed the theme song for the 1992 Saskatchewan Summer Games. He has been performing in Edmonton and area for the past 18 years.