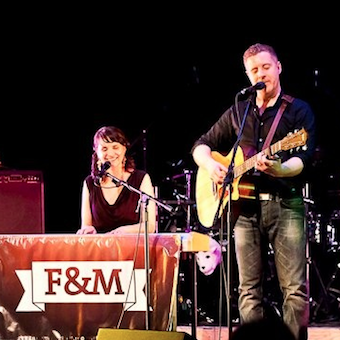 “They hit me like a very gentle and sincere steam-train, but hit me they did.” ~ SnC 184, United Kingdom

F&M’s signature sound is stubbornly its own thing, dwelling at the crossroads of folk, pop, and epic rock and drawing on a rich history of cross-genre influences and the flickering contours of modern adulthood. Songwriters Rebecca and Ryan Anderson are the heart of the Edmonton-based band, which began as an entirely different ensemble project named after a hometown funeral parlour. In 2006, it dawned on Rebecca and Ryan that they were calving like an iceberg from the original band and bobbing in a sea of Their Own Thingness, so they bravely sallied forth, borne by his guitar, her piano and accordion, and both of their distinctive voices.

Let Every Light Shine (2007, Shameless Records), crackles with intense sentiment and lofty lyricism in a mutant folk-rock sonic landscape. Two of the debut’s guest musicians evolved into genuine bandmates, and collaboratively they launched into writing Every Light Must Fade (2008, Shameless), which was almost like Shine’s B-Side: the same moral entanglements and grown-up anxieties but an increasingly complex and billowing sound and more sure-footed execution. Their third effort, Sincerely, F&M (2010, Shameless), is loping, spare orchestral folk stretched over a rock-pop backbone; waves of darkness and density crashing against brightness and space – reflective, grandly emotive, and fearlessly hungry for meaning. The album took the #1 position on Exclaim’s Folk Chart in November 2010, charting into the following year.

Wish You Were Here (August 30 2011, Shameless) is an intimately dashed-off aural postcard from F&M ’s peripatetic trio. 2010 often found them on the road between the Prairies and West Coast, with one marathon trek all the way from Vancouver Island to Ontario. During their travels, F&M refined their new three-piece dynamic: Rebecca and Ryan combined with multi-instrumentalist/production geek Bryan Miot Reichert. Reincarnating their live sound, the album captures the spirit of F&M ’s cross-Canada performances and the musical empathy between three road-seasoned friends and veteran artists. The result is pure emotion and meaning, distilled; every tone and texture is exquisitely weighted and placed, and even silences seem like notes from an eloquent universal instrument. Wish You Were Here continues F&M’s ongoing championing of substance and unflinching exploration of the wilderness of human experience in search of transcendent meaning.

“Becky and Ryan create something so different that you have to sit up and take notice… Where Ryan is darkness. Becky is light. Together they make a listening experience that you will be hard pressed to find anywhere else.” ~ Mossip!, USA