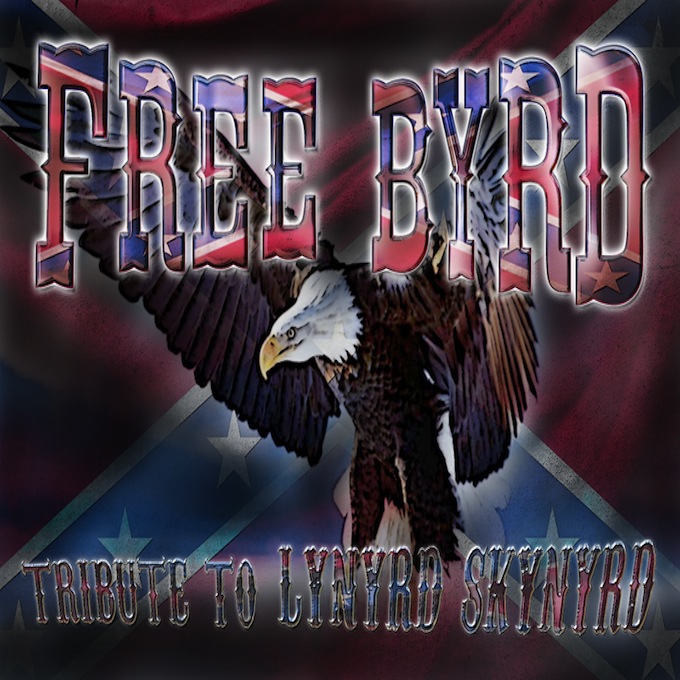 FREE BYRD is Alberta’s only Lynyrd Skynyrd tribute band and we started from our love of classic Lynyrd Skynyrd as well as the current lineup and their new God and Guns album. FREE BYRD has had amazing chemistry right from the first jam session which has continued as it has evolved. We are excited to be able to bring our live version of Lynyrd Skynyrd to Alberta.

Lead singer and founder, W Van Zant is a true blue Albertan, born and raised in the Edmonton area. His musical influences were primarily country, rock and blues and from the age of 17 he sang in several local bands. His love of Lynyrd Skynyrd inspired him to put together FREE BYRD, a tribute to the timeless music of Classic Skynyrd and the late, great Ronnie Van Zant. Right down to the point of singing in bare feet, W Van Zant strives for authenticity in replicating Ronnie’s work and mannerism and holds him in high respect. His vision and strength as a leader is the driving force behind the inception and developing success of FREE BYRD.

Lead/rhythm guitarist, Rob O’Brien “Rossington” a founding member of FREE BYRD was born in Prince George and his passion for music started at a young age. A self-taught guitarist, Rob listens to and plays a variety of tunes from Metallica to Bob Segar to, of course, Lynyrd Skynyrd. Rob has been playing for over ten years, writes his own music, has dabbled in bass and is also a solid drummer. His pride and joy (other than his Gibson) is a knockoff Ibanez that he built himself from scratch. Rob brings his passion and talent to every show and his generous spirit is his trademark.

Lead/rhythm guitarist Chris Collins, hails from Nova Scotia and has been playing in the bands, Ferrona Junction and High Seaz in Nova Scotia from 1991-1997 at which time he moved to Calgary. Chris founded 40 Watts in 1997 which also hosts the jam at BAJA Bar and Grill in Calgary. Chris has mentored with Greg Godivitz from 2009 till 2011. Chris’s playing style and general demeanor does justice to Allan Collins and Chris’s serious dedication as well as his love for classsic Skynyrd, along with his humor has made him a instant fit to FREE BYRD.

Lead/rhythm guitarist, Trevor McPhearson “Gaines” hails from Nova Scotia as well. He has played lead guitar over the last 20 years and bears a striking resemblance to Steve Gaines. Trevor is a welcome addition to FREE BYRD.

Bass player, Rev Mike Kruse “Wilkinson” started playing the bass at the age of 13.He has played bass in the Calgary cover band scene for the last 10 years in the bands !Bang and Mr. Furious. Prior to that, Rev Mike has played in numerous original and cover acts. Rev Mike’s skill and experience on bass bring strength to FREE BYRD. Mike’s assortment of hats, inspired by Leon Wilkinson, along with his dry sense of humor bring tons of extra character to the FREE BYRD show.

Drummer, Rimshot Ricky Valleau ”Pyle” was born in Saskatchewan and has played drums from an early age. He has played in bands in Saskatchewan, Vancouver and Calgary. Most notable bands are Brilliant Orange and 40 Watts. Ricky mentored under Back Alley John, is a huge classic Skynyrd fan and a welcome addition to FREE BYRD.

Keyboard player, Howard Bedient “Powell” hails from Texas and has been playing keys for 40 years. He is one of our newest members and is looking forward to exciting southern rock fans with the fine lineup of musicians in FREE BYRD. Howard lugged his Hammond B3 organ all around the United States, playing 50′s & 60′s rock, pop, country , R&B, and jazz in various acts culminating with his stint in the Bubblegum Rock 60′s group 1910 Fruitgum Company. With all the breadth of experience he has discovered that through the years, music fans are always requesting songs by Lynyrd Skynyrd and now FREE BYRD will re-create the music and energy of their favorite band. FREE BYRD is glad to have someone of Howard’s calibre and dedication as a new member of our group.

Back up vocalist, Eve Dorie “Gaines” has several years of experience as a songwriter and singer as well as being able to play various instruments. She is a welcome new addition to FREE BYRD and we are glad to have the the addition of her smile, skill, experience and voice to to the harmonies of the back up vocals of FREE BYRD’s “Hawkettes”.

Sound technician, Clayton Peters, started his music career early. Clayton began DJing at the age of 13. He eventually landed a sales position at Mothers Music and worked his way up to managing the pro audio division for 5 years. Learning a great deal about studio recording, Clayton started recording solo singer/song writer projects at his home studio. He also ventured into live sound and established himself as a reliable and thorough live sound technician. Clayton currently sits as Axe Music’s top salesman and is co-owner of Perfect Fifth recording studio which opened in 2011. Clayton is also a partner in Jester Audio where he manages sound and lighting for live bands and large corporate events year round. Clayton is an extremely valuable member of FREE BYRD with his extremely personable nature along with his talent on the mixing board. Clayton is invaluable and greatly assists us in achieving the memorable sound of Classic Skynyrd.