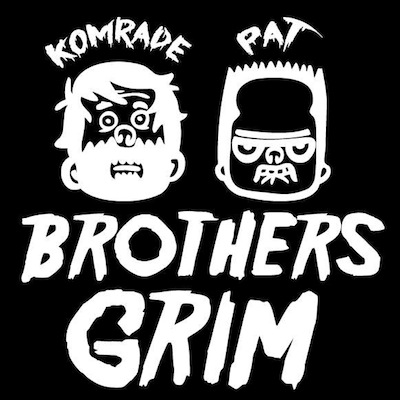 4 years in the game with over 100 performances, 3 full length CD's half a dozen music videos, real life brothers Komrade and Pat Grim have accomplished quite a bit in their young life.

After their debut release Don't Judge A Book By Its Cover in November 2008 and with the success of the City is Dying video single, Brothers Grim found themselves performing at many events for social awareness including the teen HALO initiative on Alberta Avenue, the Heart of the City Music Festival, the Walk for Sudan and the Streets Speak event at City Hall with Mayor Stephen Mandel.

In April 2009 Brothers Grim released the Grim Reefer album, a full length release dealing with Cannabis Culture and Legalization which allowed the brothers to perform for thousands at many local 420 rallies. The album Grim Reefer spawned the Elevate and Assassin of Youth music video along with the Elevate and Livin Lavish mixtapes. Always calling for Legalization and the freedom of Marc Emery, the brothers had the privilege of performing at the Vancouver Art Gallery on April 20th, 2011 to a crowd of over 15,000 and again on April 20th 2012 to over 20,000.

The Brothers Grim also founded the now defunct Grim Empire. The collective of 7 Edmonton Hip Hop artists went on to release 3 acclaimed mixtapes and perform at dozens of shows before the mutual disbandment in March of 2011.

Komrade and Pat Grim have also enjoyed solo success with the releases of Abstract Flaws Fatal Realities (Komrade) and Blunts Broads and Bottles (Pat Grim) in 2010. Always with an entertaining live show the Brothers Grim have been on the local radar with performances at Hip Hop in the Park (08, 09, 10, 11), the first annual Sounds of Strathcona (SOS) festival in 2010, and opening acts for Canada's own Swollen Members, Scale Breakers, Snak the Ripper and Belly. In May 2011 Brothers Grim opened for the underground hip hop powerhouse, Tech N9ne and opened for the supergroup La Coka Nostra in January of 2012.

Always focused on the betterment of the 118 Avenue and Beverly community, the Brothers Grim have thrown the Hip Hop on the Avenue charity show annualy for 4 years. The free all ages show runs a new toy for admission policy benefiting 630 Cheds Santas Anonymous.

The Brothers Grim hit the scene once again in 2012 with dual release. Komrade released Fallen Empire his first solo album and Pat Grim released the Growing Up EP. With more videos, projects and a NEW Brothers Grim album on the way the FUTURE IS GRIM!