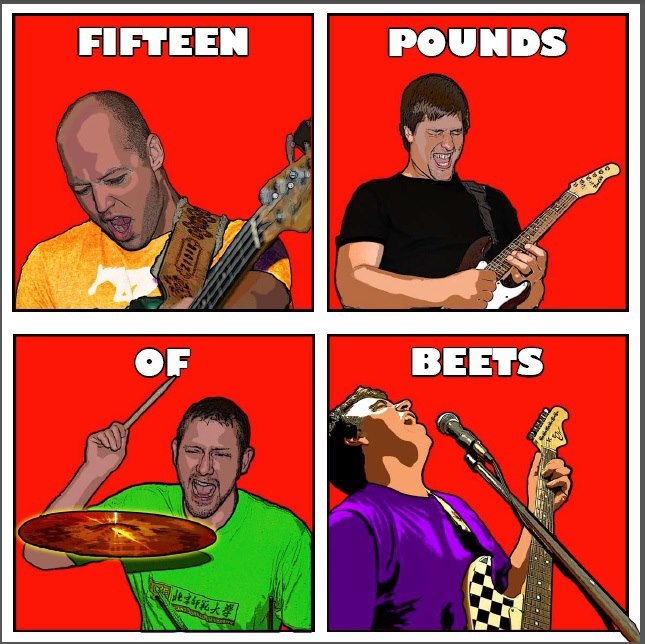 Fifteen Pounds of Beets is a rock quartet that was forged in the centre of the earth. Once they escaped their prison of magma, they only had one goal: to rock. Now, Dr. Jonny Phyre, KevBot, Nikki Tantrum and S.I.M. will pour liquid sound into your cerebellum.
Dr. Jonny Phyre, PhD.--Doctor of rhythm.
His hips never gyrating to the rhythm of the earth, because they can't. Raised on a diet of fear and rage, honey and cloves, he regrets nothing and has no regrets.
KEVBOT--your bassist from the future and singing.
At the far reaches at the end of the earth, past where the red fern grows, there you will find him.
Nikki Tantrum--Guitars and sensuality and singing. He was forged in the fjords of Norway. the only thing he eats is the throats of other animals. His vocal chords are as smooth as yak cream and yellow silk.
S.I.M.--Sensuality and guitars and rock scream.
S.I.M. was a puppet, but he found that he had the power to heal. As a young man in the deep stealth of the NORTH, he knew his talents would eventually destroy him. NOW, he only has the power to shred. He knows no human speech, he feels no human fear, he sees no human sight. He is beyond human. He will melt your face right before he melts your heart. He is S.I.M.!