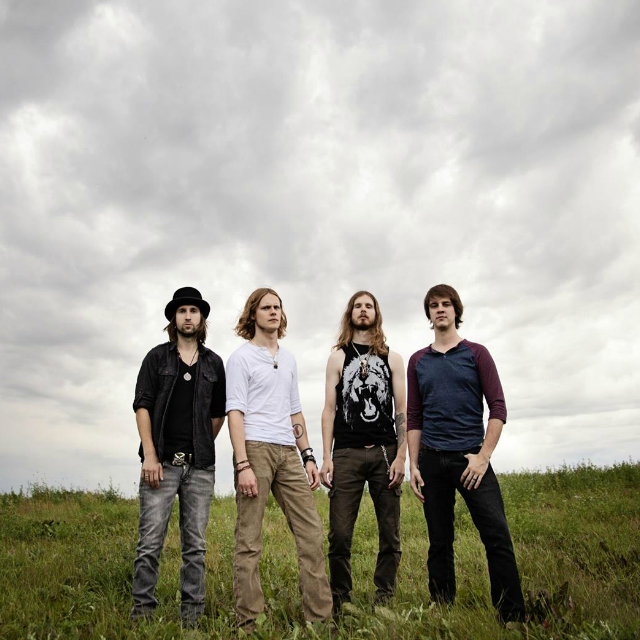 For those too young to have seen the mighty Zep rock the Garden; for the masses too late to have witnessed the man in the hat wield the axe for Guns N’ Roses; and for those who yearn for a no frills, no gimmicks rock and roll show characteristic of the men who defined this era—you’ve stumbled to the right place.

Rock and roll is not dead. Channelling an array of artists from rock’s heyday and relying heavily on their vintage record collection, Heaviside lives and breathes rock and roll ecstasy.
This Edmonton-based quartet, formed in December 2006, is committed to the values bound to the authentic rock sound.

The extended guitar solo lives here, in each and every one of Heaviside’s live performances. Rounded out by incendiary vocal howls and a truly colossal thunder-of-the-Gods rhythm section, Heaviside is a force to be reckoned with.

Establishing themselves in the vein of ’70s hard rock, high school friends Mitchell Reynaud and Kyle Green cultivated their aspiration to become a truly standout act. With Mitchell taking charge of vocals and guitar, and Kyle helming the bass, the duo embarked as a modest garage band. Adding Mitchell’s younger brother Spenny on drums and lead guitarist Johno Hermary, they began forging their sound in the annals of rock history.

After months of preparation the band set forth armed with an arsenal of riff-laden songs, determined to carve their way into the local music scene. Playing some of central Alberta’s sleaziest venues along with many notable establishments, Heaviside garnered a reputation as a firing-on-all-cylinders live act. With each performance topping its predecessor, the band has risen to prominence as one of Alberta’s premier talents.

Throughout their six-year ride Heaviside has seen several noteworthy achievements. In June 2010 Heaviside competed in Alberta’s Last Band Standing and placed sixth out of 72 of the province’s finest bands. Their 2011 single “Queen For A Day” debuted at #83 on the Canadian Active Rock Chart, and was featured on Alan Cross’ nationally syndicated radio show Explore Music. Additionally, Heaviside was nominated for the Edmonton Music Awards twice in the past two years.

Most recently, band introduced their new album Wasted Generation with a characteristically raucous performance that filled Edmonton’s Pawn Shop to the brim. Furthermore, the album’s lead single “Lady” ascended to #60 on the Canadian Active Rock Chart. The accompanying music video also received a great deal of attention, earning the band yet another feature by Alan Cross, this time on his web based A Journal of Musical Things. In March 2013, they released their second single, “War Machine,” which is receiving radio play in B.C., Alberta and Saskatchewan. In summer 2013, Heaviside built upon their success when they took the stage at Boonstock Music Festival, and headlined Alberta’s Own Independent Music Festival. Heaviside anticipates a busy 2014 as they write and record new material for their upcoming album.

Make no mistake, rock and roll is very much alive.