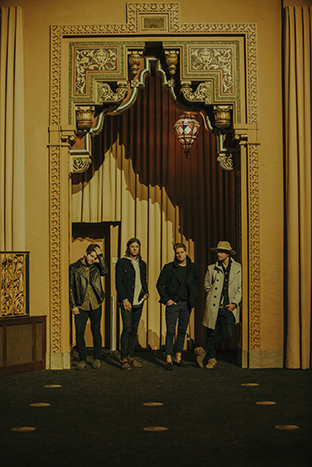 After multiple sell-outs for their cross-country acoustic run, GRAMMY-nominated rock band NEEDTOBREATHE have announced a third leg of their intimate Acoustic Live Tour. The new dates, which feature Nashville singer-songwriter Trent Dabbs, extend the band's trek in support of their first-ever acoustic live album, Acoustic Live Vol. 1. Leg Three of the Acoustic Live Tour kicks off April 29th in Ann Arbor, Michigan, taking the band through an extensive tour of the Northeast U.S., Canada, and wraps up May 25th in Ft Worth, Texas (tour itinerary attached). Tickets will be available to The Insiders Fan Club first beginning Monday, February 11th at 10am ET, with general onsale beginning Friday, February 15th at 10am local time. For complete details and ticketing information, please visit www.needtobreathe.com.

"We're blown away by the fan response to the 'Acoustic Live Tour' thus far and thrilled to be adding more dates across the U.S. this Spring. We're especially glad to be returning to Canada for a few shows... playing our acoustic show there for the first time ever," said Bear Rinehart of NEEDTOBREATHE.

Acoustic Live Vol. 1 was entirely self-recorded last year across the band's first-ever fully acoustic tour and features commentary between tracks that transports listeners directly into the audience. One of the numerous standout moments featured on the record include the band's retelling of their first meeting with friends Drew & Ellie Holcomb, followed by a surprise appearance by the duo at NEEDTOBREATHE's sold-out performance at the historic Ryman Auditorium in Nashville.

The 12 song collection was produced solely by NEEDTOBREATHE and mixed/mastered by the band's own Seth Bolt (backing vocals, bass) at his Plantation Studios in Charleston, S.C.

Acoustic Live Vol. 1 represents over a decade of music from five of the band's six studio albums and is a true compilation of some of NEEDTOBREATHE's greatest hits prior to entering the studio to record their seventh studio effort.

Due to scheduling conflicts, the Acoustic Live Tour show on Friday, February 15 in Ann Arbor, Michigan has been POSTPONED until Monday, April 29. Tickets will be honored for the postponed date, and refunds will be offered at point of purchase for those who are no longer able to attend. For more information, please visit needtobreathe.com/tour.

About NEEDTOBREATHE
NEEDTOBREATHE is a GRAMMY-nominated rock band hailing from South Carolina, comprised of brothers Bear Rinehart (vocals, guitar) and Bo Rinehart (guitar, vocals), Seth Bolt (bass, vocals), and Josh Lovelace (keys, vocals). Their most recent album H A R D L O V E released in 2016 and debuted at #1 on the Billboard Top Albums, Top Current Albums, Top Rock Albums and Top Alternative Albums charts and #2 on the Billboard 200, their greatest debut yet. H A R D L O V E is the follow-up to 2014's Rivers In the Wasteland, which debuted at #3 overall on the Billboard 200 and spawned the RIAA-certified Gold single "Brother (feat. Gavin DeGraw)." The hit earned the group their first GRAMMY nomination as well as a pair of Billboard Music Award nominations.