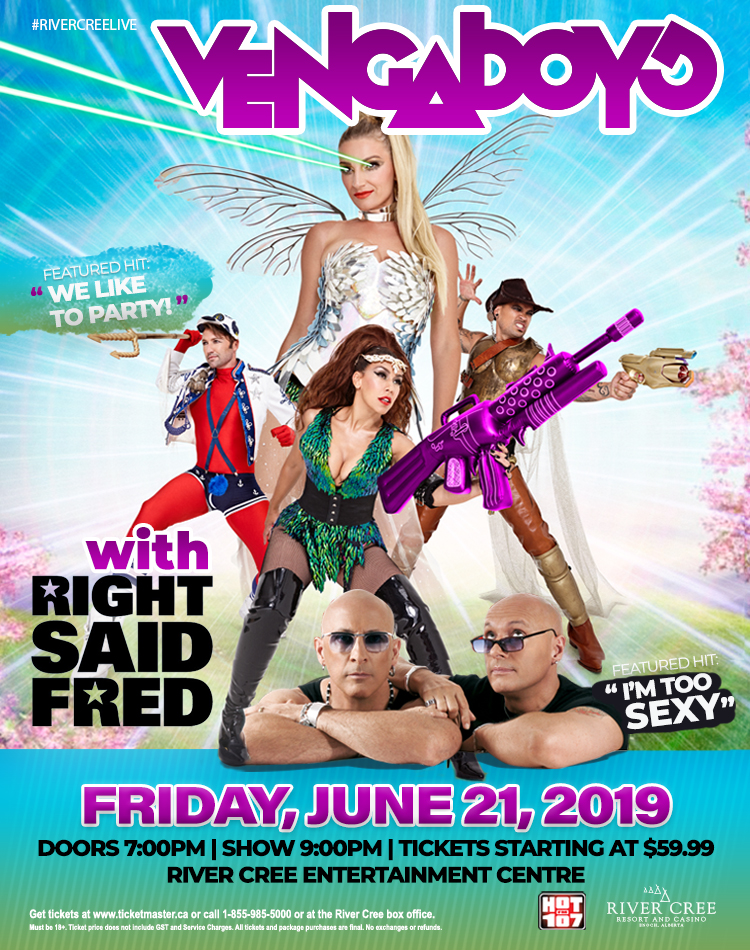 It’s unanimous around the world! Major booking agents everywhere agree – Vengaboys are without a doubt Europe’s #1 Party Act!
Vengaboys are back and hotter than ever. Since their global return in 2009 to international stages, bookings for their nonstop world tour are up by 20% year-on-year. The result is an amazing 150 major shows per year with lots of return booking requests.

Here’s what the press had to say about their recent string of sold out shows in stadiums throughout Australia:
“Blown away with awesomeness!” – The AU Review“
“Raucous cheering, stomping and screaming – honestly one of the first genuine
pleas for an encore witnessed in a very long time…” – Tonedeaf
“An infectious party for all!” – Vulture Magazine
“Shouting, dancing, singing and just having a great time, and that’s an
understatement – it was more like a hectic huge 90’s party.” – Cooltry
The Vengaboys Live Experience showcases their multiplatinum hits Up & Down, Kiss (When the sun Don’t Shine), We Like To Party!, Uncle John From Jamaica, Boom, Boom, Boom, Boom!!, We’re Going To Ibiza!, and Shalala Lala, along with current Top-40 party hits that are regularly added to the mix.
The original members of the Vengaboys are a ‘lean and mean party-machine’ and definitely know how to get the party on powered by insane outfits, live vocals, and spectacular visuals for a night of full-on fun!
Around the world, eager fans are tuning into the raging foursome with over 250 million Vengaboys video views on YouTube and more than a million listeners on their Spotify channel each month! And, there’s no shortage of followers jumping in on Instagram and Facebook.
Fun fact: Every three minutes someone, somewhere in the world, mentions the Vengaboys on social media.
The Vengaboys deliver a 100% satisfaction guaranteed live show, always promising to blow off the roof for audiences wherever they perform. Vengaboys – Europe’s #1 Party Act!

Right Said Fred are one of the UK’s most enduring and pop exports. Despite being known for their 90s hit ‘I’m Too Sexy’, Bob Dylan, David Bowie, and Taylor Swift have a connection to the band as well.
Formed in 1989 by brothers Fred and Richard Fairbrass, the pair have achieved over 22 million sales globally, have reached number one in 30 countries, and were the first band to achieve a number one in the US with a debut single.

The multi-platinum brothers went on to win two Ivor Novello Awards for their hits ‘I’m Too Sexy’ (1991) and ‘Deeply Dippy’ (1992), release nine albums, share stages with big names all over the world, achieve a Brit award nomination, play in front of the Queen and release a track for Comic Relief. Their success is global, having reached fans all over the UK, Europe, the US, and beyond and it all started in a basement studio in Acton, London.

Back in 1990, Fred and Richard, together with guitarist Rob Manzoli, wrote ‘I’m Too Sexy’. Fred and Richard borrowed the money to demo the song and to keep the costs down they recorded at night in a studio in Ealing that had gone into receivership. The final session was at Red Bus Studios in London in early 1991. ‘I’m Too Sexy’ along with the song ‘Swan’, which also made it onto their debut album ‘Up’ was rejected by every record label the guys took it to. However, they followed their instincts nevertheless – they knew they were onto something special.
Opening with Richard’s vocals only with the (now) iconic lines, “I’m Too Sexy for my love, too sexy for my love, love’s going to leave me”, the single stood apart from the bland, insipid chart toppers of that year. ‘I’m Too Sexy’ was tongue-in-cheek, it was fun, and it brimmed with the band’s independent spirit, and the band were certainly not interested in following the trends at the time. Fred remembers the passion they had for the track at the time: “We knew we had recorded something new and very different, we just didn’t know how successful it would prove to be”
To purchase tickets go to www.ticketmaster.ca; or call 1-855-985-5000 or at River Cree Casino Box Office.