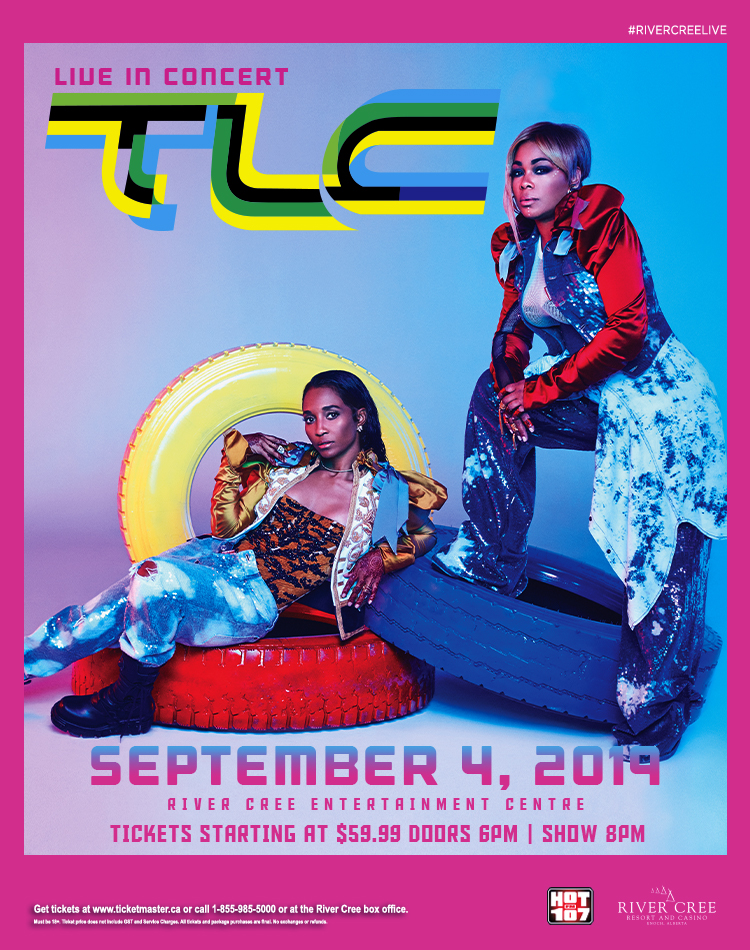 One of the greatest legacies in music history can be summed up by just three letters—TLC.

Those characters merely hint at the talent of Tionne “T-Boz” Watkins, Rozonda “Chilli” Thomas, and the late Lisa “Left Eye” Lopes, but they immediately evoke an unparalleled journey nonetheless. That journey encompasses immortal anthems such as “Waterfalls,” “Creep,” “No Scrubs,” and “Unpretty,” to name a few, as well as sales of 70 million records worldwide, four GRAMMY® Awards, two RIAA diamond-certified albums among a total of four multiplatinum albums, ten Top 10 singles, and four Number 1 singles. Meanwhile, the VH1 original film CrazySexyCool: The TLC Story chronicled their rise and broke records as the highest-rated television film premiere of 2013 and the highest-rated original premiere on the network between consistent touring.

Given the legacy behind this timeless moniker, it’s fitting the undisputed “best-selling American girl-group of all-time” chose the name TLC for their fifth and first album in 15 years.

“We’re still TLC,” affirms Tionne. “If it’s not broke, don’t fix it. We kept the same recipe, which is strong lyrical content and talking about things that affect all of us. When you have time between albums, you have more to speak on. We talked about what was on our minds and hearts.”

“There’s no glitter or sprinkles about it,” smiles Chilli. “It’s just our name. It’s who we are. We’re back. We’re here to stay. This is a continuation of our evolution. So much has changed since we first came out, but the issues that men and women go through haven’t changed. We love talking about that stuff, and there’s a place for it.”
There’s definitely a place for it, as countless fans quite literally “demanded” a new TLC album in 2015. Unassumingly, the girls launched a Kickstarter campaign to simply gauge interest. What they got was an overwhelming and seismic groundswell of support. Fans worldwide—including Katy Perry, New Kids On The Block, Donnie Wahlberg, Bette Midler, —enthusiastically contributed to this next chapter. Raising over $400,000, it became the “fastest and most funded pop project in Kickstarter history.”

“We’ve always been involved with our audience, especially during FanMail,” Tionne continues. “To have the fans do this album with us was perfect. There was this freedom that came with it. The packages made it even more enjoyable for everyone. If Michael Jackson told me I could go to the movies with him, I would’ve given my rent money and all of my clothes to do that,” she laughs. “It was a fun way to bond with the people who support us even more.”

“The fans kept asking for new music,” recalls Chilli. “It had to be the right situation though. The opportunity never presented itself until the whole Kickstarter thing came into play. We were hesitant at first. Then, we realized we could incorporate everybody who loves our music in a way we hadn’t yet. They literally helped us create the album. The love kept pouring in, and we were really touched. It was such great motivation for us when we got back in the studio.”

TLC went as hard as ever in the booth. As a result, the music picks up exactly where they left off just sharper, smarter, sassier, and even a little sexier than before. The same inimitable chemistry simultaneously drives all twelve tracks.

“I’ve always felt that vibe between us,” says Chilli. “The chemistry has empowered us to touch so many in a positive way. Even if they don’t know us, fans think of us as their homegirls. It’s because we believe everything we say and it’s relatable.”

The girls introduced the record with the appropriately titled “Way Back” [feat. Snoop Dogg]. With its sun-kissed Southern California bounce and smooth Snoop cameo, the single lives up to Chilli’s description as “the perfect summer record.” It quickly cracked 2 million Spotify streams and earned acclaim from Time, Rolling Stone, Spin, and Pitchfork who claimed “‘Way Back’ is a fine way to kick off their hard-earned victory lap.”
From the get-go, “No Introduction” sets the stage with fast and furious verses reintroducing the girls. Meanwhile, TLC combats bullies head-on with hip-hop swagger and pop poise on the clever and catchy “Haters.” Then, there’s “Joyride,” which offers up a heartfelt “thank you” to the fans worldwide who made this record a reality. Steeped in soul, the poignant and powerful plea of the single “American Gold” continues a tradition of social consciousness the girls began on “Waterfalls.”
“With ‘Waterfalls,’ we were the voice for HIV and Aids,” Tionne says. “We thought it would be awesome to now take up for the troops who have lost lives on this American soil and fought for it. They bled American gold, so on “American Gold” we’re saying, ‘Thank you, we appreciate you, and your work hasn’t gone unnoticed.’ We notice.”

At the end of the day, it’s TLC through and through, and there’s nothing more CrazySexyCool than that…

“I hope people hear this and think, ‘Damn, they did it again’,” concludes Chilli. “I want them to feel just like they did when they first heard us. I know I’ll be up there shaking it at 100!”
“There’s something on here for every age and walk of life,” Tionne leaves off. “That’s what we’ve always aimed to do, and I think we accomplished that again.”