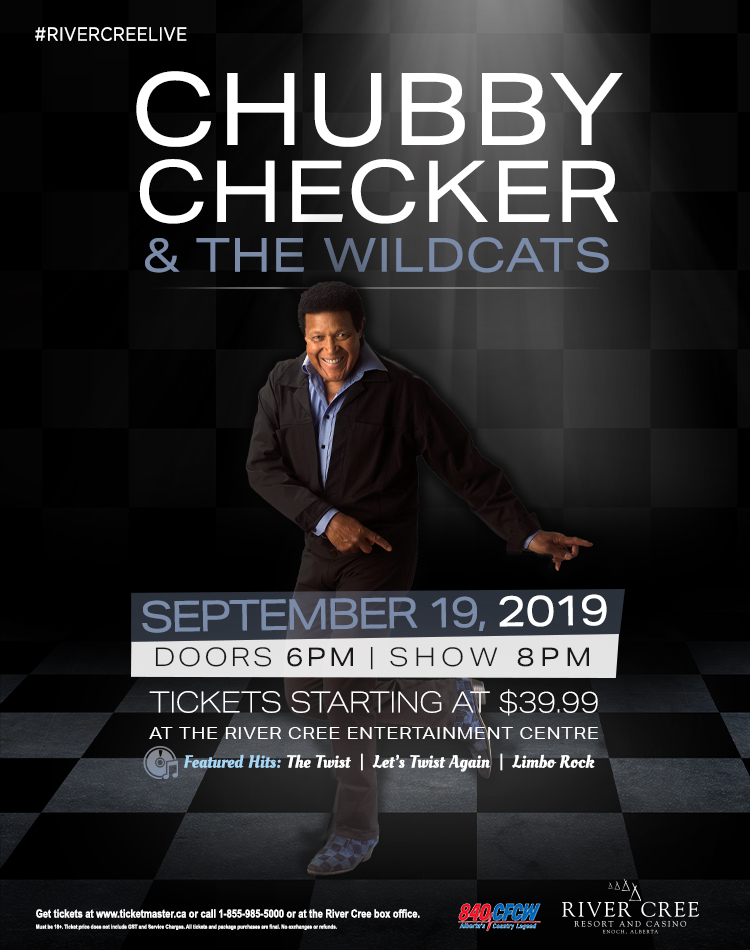 Chubby Checker is an entertainment industry icon best known for popularizing The Twist, the number one song of all time… and the only song to hit the number one position twice in two different years.

The Twist is the first song in history to be number one for over 50 years. It will be the number one song until 2065 when Billboard Magazine nominates another song for that honor. Chubby also invented and popularized many other dances, including the fly, the pony, the shake and the hucklebuck. All of them exist in some form today on the dance floor, but it’s the legacy of The Twist that endures and secures Chubby’s place in history.

In October of 2018, Chubby was honored when he won the Casino Entertainer of the Year award. Chubby continues to tour around the world and make people happy.

Seeing him in concert you would think that doing The Twist is the magic potion for the fountain of youth. He is an energetic, articulate entertainer. His concerts are filled with people of all generations. He is current…he is amazing and he explodes on stage getting everyone involved.

In 2 minutes and 42 Seconds, Chubby Checker revolutionized popular culture and changed the Music Business forever. When he appeared on American Bandstand in 1960 and performed “The Twist,” it was the dawn of a new era in Rock & Roll. He stands alone as a one of a kind rock icon, who has had 36 Hit Records, is the only artist to have a single go to # 1 twice, and according to Billboard, has the # 1 Single for the whole decade of the 60’s.

Chubby was awarded the first Platinum Single, the first Rock Grammy and has sold an astounding 250,000,000 records over the years. That’s why Dick Clark has said: “The three most important things that ever happened in the Music Industry are Elvis Presley, The Beatles, and Chubby Checker.” Every time Chubby steps onto a stage, he demonstrates charisma and a unique quality that can never be equaled. Chubby Checker is the most exciting performer out there and he only gets better with time.