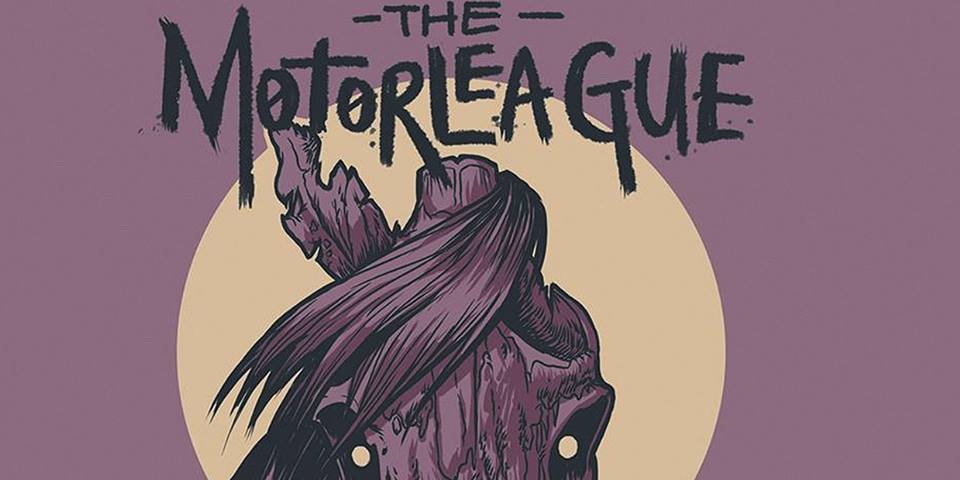 It’s mere seconds into a typical track by The Motorleague that listeners realize what they’re in for. Be it a blistering single-string guitar riff delivered through an amp that’s seemingly been set afire or a bludgeoning smash to the snare drum, this band delivers its punk-influenced hard rock with an unrelenting urgency from start to finish. Or at least that was the case with the band’s heralded 2009 debut LP, Black Noise… their 2013 follow-up Acknowledge, Acknowledge also features a flurry of high-energy, riff-anchored rock, it’s also much more dynamic and expressive – and that was the idea from the outset.

Formed in Moncton, NB from the relics of revered local rock outfits The Ditchpigs and The Monoxides, The Motorleague was originally an outlet for lead vocalist/guitarist/primary songwriter Don Levandier and his band mates to blend a penchant for ‘90s skate punk with the sludgier sounds of stoner rock. “I never knew whether I wanted to be in a punk band or Fu Manchu rip-off,” Levandier says of the group’s formative years, and even now, traces of each are audible in the band’s output.
Having undergone more than its fair share of lineup changes, with the release of Acknowledge, Acknowledge, The Motorleague has marked a new beginning with a firmly- cemented stable of players set to carry the banner forward. Joining Levandier are Shawn Chaisson (bass/vocals), Francis Landry (drums), and Nathan Jones (guitar/vocals). And while their influences are still on their sleeves, over time, The Motorleague has morphed into a rock band that exists strictly on its own terms.
Black Noise and its sinfully catchy single “Hymn For The Newly Departed” attracted quite a bit of attention to the band. In addition to taking home two East Coast Music Awards and one Music New Brunswick award in 2010, The Motorleague has also performed alongside contemporaries like Alexisonfire, Flogging Molly, Rise Against, Priestess, and Propagandhi. Produced by Steve Rizun (The Flatliners, The Creepshow), Acknowledge, Acknowledge is an extension of the sound established with its predecessor. Tracks like lead single “North America” are dense and dirty with the familiar slick riffs, huge harmonies, and anthemic choruses that unite lost voices. “Every Man Needs A Cape Breton,” on the other hand, is slightly more upbeat and boasts a healthy dose of mainstream rock. Others like “Oh How The Mighty Have Fallen” and “Burned In Effigy” are more sparse in their arrangement, drawing the focus to Levandier’s fine-tuned vocal phrasing and lyrics.

“A lot of these songs deal with frustrations,” Levandier explains delving into his words. From the Internet turning into an arena of hatred to the hardships of being on the road to the band’s geographical underpinnings, Levandier says it’s a simple of matter of writing about what he knows and sees – and that honest and pure approach spreads throughout every aspect of The Motorleague.

“We’re not a new band,” Levandier says. “We’ve been at this for years; we’ve played some big shows and been to some cool places. Now we want to get out on the road again and push onwards.” Armed with a new collection of songs and plenty of piss and vinegar, The Motorleague will soon be impossible to ignore, infecting audiences across North America with their intense live performances and now-signature hard rock stylings. Acknoweldge, Acknowledge indeed…