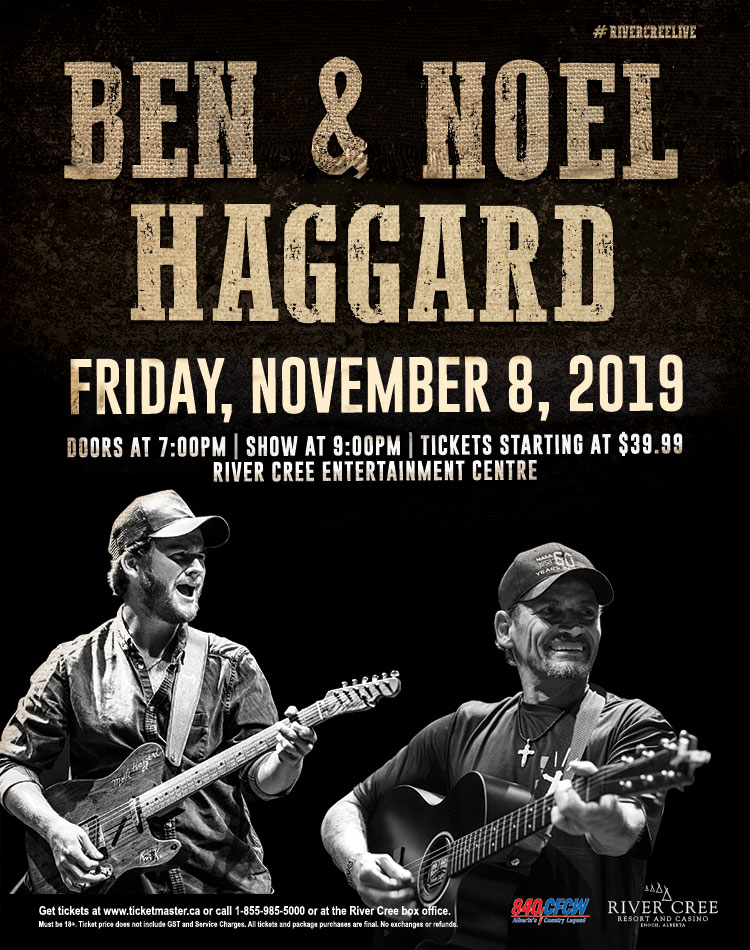 “I live the kinda life most men only dream of/I make my livin’ writin’ songs and singin’ them,”

For fans of his late, legendary father, country music great Merle Haggard, his youngest son Ben is no Stranger – in fact, he’s been the lead guitarist in Hag’s longtime band of the same name for the past eight years, since he was 15 years old, fitting in easily with veterans like musical director Norm Hamlet and Scott Joss.

Ben was a regular on Merle Haggard’s recordings, took the stage with him and the Highwaymen (Willie Nelson and Kris Kristofferson) as well as Blake Shelton for a memorable performance at the 2014 Grammys and for the 2012 “All for the Hall” show besides two of his idols, Vince Gill and Keith Urban. Earlier this year, Ben was featured with the Strangers backing Toby Keith for a Merle tribute on the nationally televised American Country Countdown Awards. He also contributed versions of “Mama Tried” and “Sing Me Back Home” to 2014’sWorking Man’s Poet: Tribute to Merle Haggard album which also featured Toby Keith, Jason Aldean, Jake Owen, Luke Bryan and Dierks Bentley.

Taking the torch from the Haggard paterfamilias, Haggard recalls a conversation he had with Merle, who sported what his son described as “a look of great depth in his eyes… He was always right about something he said because he had thought about it for so long. He overanalyzed everything to the finest degree in the most artistic way possible.”

Ben recalls Merle telling him, “You’d be an idiot not to take my guitar and my bus, not to sing my songs for as long as you can… Go out there and play until there’s nobody to play to.” And that is precisely what Ben Haggard has done over these past months and will continue to do in the near-future, effectively putting his own promising musical career on the back burner for the time being – even as he plans to relocate to Nashville to pursue his own artistic identity when he’s ready.

For anyone who’s heard young Haggard play guitar with his father, that talent is undeniable, but he’s only recently discovered a singing voice that, while borrowing genetically from dad’s wellworn gravitas, adds its own fresh take on songs like “Sing Me Back Home” (a performance of which is featured on Ben’s Facebook page), “Heaven Was a Drink Of Wine,” “Workin’ Man Blues” and “What Am I Gonna Do With the Rest of My Life?,” all of them taking on new meanings in the wake of Hag’s passing.

“I watched him sing on-stage, absorbed the little things he was doing, the tricks with his voice, how he handled the crowd,” says Ben, who obviously learned his lessons well. “It was like going back to school. Things I didn’t realize I picked up from the eight years I spent on the road with him started to come into play. My fear of the mic kind of slipped away. Things just unfolded in a beautiful way. I’m now starting to feel comfortable singing for people.”

Indeed, Ben Haggard has proven as natural a performer as you’d expect from someone with his DNA. “I’ve always suffered from stage fright. I only sang in front of my father a couple of times, once live and once in the studio. All of a sudden, he’s telling me I’ve got to sing for everybody. I had to grow a pair of balls, get out there and do it.” His next challenge is to carve out his own musical career, lest he be accused, as he says in his own self-effacing way, “of riding someone else’s coattails.” Ben describes an incident that took place when he was four years old, and just realizing his father
was “somebody special.”

“I asked him, ‘Since you’re famous, does that make me famous too?’ And he said, ‘Son, you’ve got to create your own thunder.’ That’s always stuck with me. I look back at that moment as if it were a movie. It’s something I never forget.”

When asked what his own musical personality might be, Ben admits, like his father, he feels like a bit of an outsider when it comes to contemporary country music. “I couldn’t really go out there and sing about drinking a beer on a tailgate under the moonlight,” he laughs. “I want to sing about things I value within my heart. Honesty is always pushing against the grain, in a way. My dad always said it’s easier to force-feed people something they don’t want than actually giving them what they do.”

Ben admits, “I’ve started to write and finish songs lately. I used to start writing and then never finish, but now, there’s more material to draw from. I’m not writing about being 15 anymore; there are a lot of things I’ve gone through and had to overcome. I turned that talk I had with my dad about taking over for him into a song. When I record it, I think it’s something that will resonate with people. It’s about as real as you can get in regard to what he was telling me.”

He also admits feeling a creative kinship with Americana artists like Sturgill Simpson, whose Metamodern Sounds in Country Music album proved a throwback to the music his father made. The two have struck up a friendship, with Simpson agreeing to produce Ben’s album when he’s ready to record.

For now, Ben’s content with burnishing his father’s legacy, playing his songs and pleasing Merle’s many fans, doing his part as the good son.

“When I’m compared to him, I realize it’s to someone far greater, but it gives me hope and the drive to emerge from his shadow, and hopefully, one day, to stand just as tall,” Ben says humbly. “Merle shot for the moon, and there’s no reason I can’t aim for it, too.”

Back on-stage, Ben leans into one of his father’s signature songs, “Footlights,” about his own career, and, while fudging his age, the sentiment seems to ring true from one generation to the next.

“But I’m 41 years old and I ain’t got no place to go/When it’s over/So I hide my age and make the stage and/Try to kick the footlights out again.”

For Ben Haggard, this is just the beginning of his artistic journey, and he still has plenty of places to go, but he looks well-prepared to kick out the footlights in his own right.

Growing up the son of a man who has defined country music’s possibilities, Noel Haggard has enough life experiences to more than completely inhabit the things he sings about…and does it with the same natural phrasing and richly sonorous baritone that one would expect from someone with such a loaded last name.