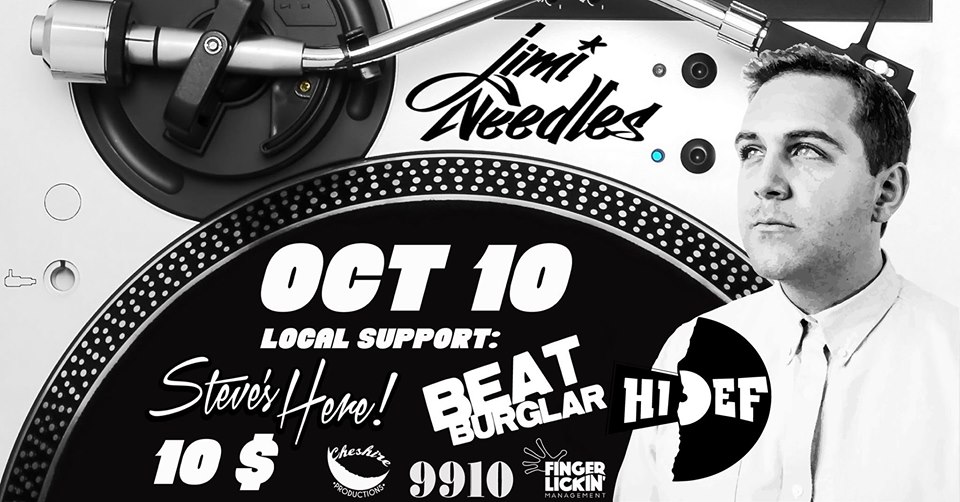 Cheshire Productions presents Jimi Needles (UK). Join us October 10, 2019 at 9910 for a night of funky bliss!! As always we have a stacked local lineup to make you move and groove all night long!!

$10 at the door or you can purchase hard copy tickets from us!

The original turntable trickster and funk maestro, the award-winning Jimi Needles is the London party-starter DJ of choice. Jimi's musical origins are routed in hip hop, soul, funk and disco but brings to the turntables a fusion of pin-point scratching, breaks & bass music. His cut-n-paste antics leave virtually no genre untouched creating the ultimate live soundtrack whilst always showing recognition to old school and retro classics.

He’s best known for his intricate genre-spanning party mixtapes, deck-defying festival sets and his array of varied bootlegs & original productions on labels such as Rocstar, Bombstrikes, Respect Music & Jungle Strikes. 2015 saw Jimi take on huge stages at Glastonbury, Shambala and Blissfields as a solo artist, and an extensive tour with his soul band Ephemerals (Jalapeño Records). He's previously toured Australia, Europe & Russia, whilst holding down residencies and his own club nights within London.

More Event Details
No Minors permitted
Cover Charge: $10 at the door or you can purchase hard copy tickets from us!
Tickets available at venue