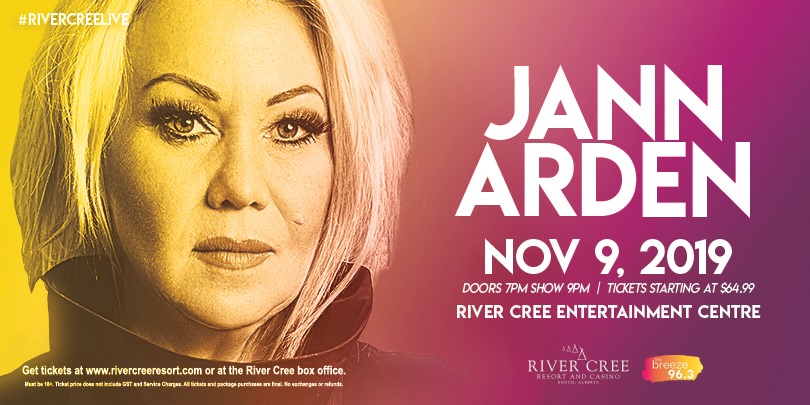 Arden has released 14 albums with 19 top ten singles. Her most recent recording, “These Are the Days” released in March of 2018, is available now. Once again Grammy Award winning producer Bob Rock was behind the console of what could arguably be Jann’s most personal and poignant offering to date. The album was nominated for 2019 Juno “Album of the Year”.
In her career to date, Jann has received 8 Juno Awards including Female Artist of the Year and Songwriter of the Year. She hosted the Awards ceremony in 1997 and again in 2016. Arden is also the recipient of 10 SOCAN Awards, 4 Western Canadian Music Awards, a Much Music Video Award, 3 Prairie Music Awards and an Alberta Recording Industry Association Award.

Arden is, of course, an author of note, with two Canadian Best Sellers including, penned memoir “Falling Backwards”, as well as ‘Feeding My Mother –Comfort and Laughter in the Kitchen”, released in paperback in April 2019.

Arden is the proud recipient of a star on Canada’s Walk of Fame; she has been inducted into the Canadian Association of Broadcasters Hall of Fame and has been given the Vantage Women of Originality Award. In 2012 she was awarded the Queen’s Diamond Jubilee Medal and in 2013 was inducted into the Western Canadian Music Alliance Hall of Fame. And earlier this year, she was awarded the Order of Canada.

Jann is currently working on Season 2 of her Top-Rated CTV original series, JANN.

Whether she is captivating audiences with her heartfelt music, entertaining them with her quick wit or sharing her written word in a boldly honest voice –Jann Arden is a Canadian original –a brilliant multi-dimensional talent!