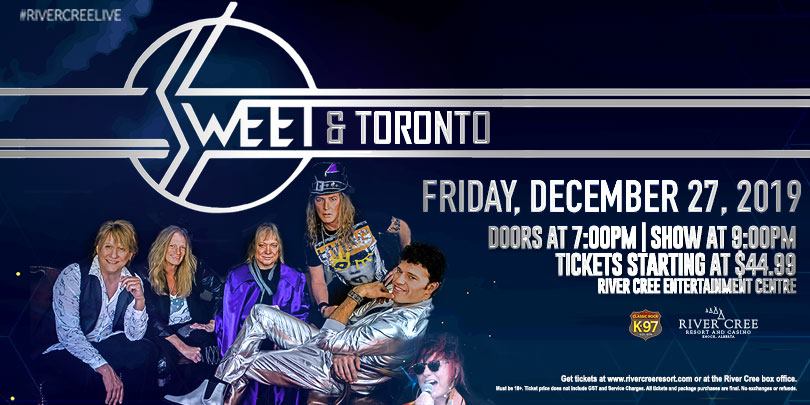 BIO for Sweet
Legendary rock band Sweet (aka The Sweet) shot to the top of the charts in the 1970s, selling over forty million records with such hits as “Ballroom Blitz,” “Fox on the Run,” “Love is Like
Oxygen,” “Little Willy,” “Blockbuster,” “Hellraiser,” “Action,” and many others. Even during that decade of excess, Sweet stood out with a charismatic stage presence and a relentless, innovative fusion of grinding hard rock and melodic vocal harmonies that was far ahead of its time.

This seminal rock group has been cited as an influence by some of today’s most successful artists, and their songs have been covered by such heavyweights as Def Leppard, Mötley Crüe,
Joan Jett and Poison. Even rap icons The Beastie Boys sampled one of Sweet’s songs in their hit “Hey Ladies.” Over the years, Sweet’s music has become a part of the pop culture lexicon, having appeared in dozens of movies (e.g., “My Best Friend’s Girl,” “Dazed and Confused,” “Detroit Rock City,” “Bordello of Blood,” “Lords of Dogtown,” “Daddy Day Care” and, of course, “Wayne’s World”), television shows (“Life on Mars,” “Dancing With The Stars”) and commercials (a Mitsubishi ad which aired during the Superbowl). Several of the band’s tunes have been included in the popular video games “Rock Band” and “Guitar Hero,” and Formula One Racing featured their top 20 hit “Action” in its video for the 2009 Monaco Grand Prix.

Original founding member Steve Priest re-formed the band in Los Angeles in 2008, launching at the world-famous Whisky-a-Go-Go on the Sunset Strip. Since that time, the band has played to
thousands of people in the U.S., Canada, Mexico, South America and Europe, garnering rave reviews.

Universally acknowledged as the “godfathers of glam,” Sweet were and are far more musically sophisticated than they were given credit for in their own time. They have since come to be
recognized as an iconic group who produced timeless hits, and they still deliver these songs with an energetic stage performance that appeals to audiences of all ages from eight to eighty.

BIO for Toronto
Toronto’s first album, Lookin’ for Trouble, was released in 1980, and lead single “Even The Score” was a minor hit, just missing the Canadian Top 40. Head On (1981) followed, after which
Costello and Fox left the band to be replaced by Gary LaLonde (later of Honeymoon Suite) and Barry Connors (later of Coney Hatch). The band was nominated for a Juno in 1981 for “Most
Promising Group of the Year” along with Loverboy, Martha & the Muffins, Red Rider and Powder Blues Band (winner).

This sextet recorded Get It on Credit (1982), with lead single “Your Daddy Don’t Know” reaching top 5 in Canada, and hitting No. 77 in the US. It remains their best-known hit. “Your Daddy Don’t Know” was also nominated for a Juno Award in 1983 for Composer of the Year (the song was written by Geoff Iwamoto and Michael Roth). Lalonde was then replaced by Mike Gingrich for 1983’s Girls’ Night Out in 1983. This album also received attention, as did the band’s Greatest Hits album of 1984. In 1984, Holly Woods was nominated for a Juno for “Female Vocalist of th
Year” along with Dalbello, Shari Ulrich and Anne Murray (winner).
There were subsequently several exits and entrances in 1984/85, with founding members Allen and Alton leaving, along with drummer Connors. They were replaced by Marty Walsh (guitars),
Daryl Alvara (guitars) and Paul Hanna (drums), and the band rechristened themselves Holly Woods and Toronto. In 1985, the re-vamped sextet released their final album, Assault and
Flattery. It featured the single “New Romance”, written by Holly Knight and Anton Fig.

In 1985, the band was forced into breaking up when Solid Gold Records filed for bankruptcy protection. Woods and Kreyer ended up relocating to Atlanta, where they went into Lowery
Studios to record a solo album by Woods. However, the album was shelved for over 20 years, until Cyclone Records acquired the rights to the “lost” masters and released the album in 2007.
The band scored a handful of hit singles in their native Canada during the early 1980s, including “Your Daddy Don’t Know”, “Start Tellin’ the Truth”, and “Girls’ Night Out”. “Your Daddy Don’t
Know” was covered by The New Pornographers for the 2003 film soundtrack “FUBAR: The Album”.

The song “What About Love” was originally recorded by Toronto during the “Get It on Credit” sessions, having been written by band members Alton and Allen along with outside collaborator
Jim Vallance. However, the band elected not to release the song, and the frustration Allen and Alton faced in getting this and other material onto Toronto’s albums eventually led to their departure from the group. In 1985, the song was offered to Heart, who turned “What About Love” into an international top 10 hit. Toronto’s original version was eventually released in 2002
as a bonus track the CD reissues of several of their albums

To purchase tickets go to www.ticketmaster.ca; or at River Cree Casino Box Office.