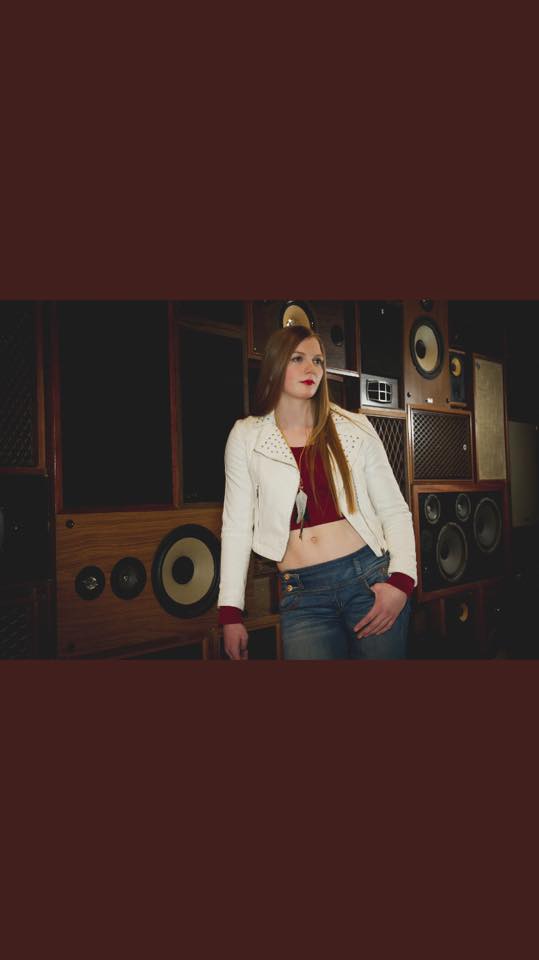 Whether playing an intimate concert or on stage at the Edmonton Folk Festival, 18 year old Rebecca Lappa is loving every minute of her journey into the world of music. With a haunting voice and elegant lyrics she delivers a musical renaissance inspired by history and life events spun with romance, fantasy and intelligent wit. In short, Rebecca is resurrecting the art of the 'Folk-tale' and making it accessible and hip again!

Rebecca was honoured to win Young Performer of the Year at the 2015 Canadian Folk Music Awards and "Adult Alternative Recording of the Year" at the 2015 Edmonton Music Awards. Currently she is pursuing her bachelor's of Music at MacEwan University and continues to explore her love of all things music.

Since she was a little girl, Rebecca has loved to sing and perform. At age 2, Rebecca was exposed to music in the Music Fun Time Classes at Visionary College. Even then, her parents knew there was something special about her musicality, and so she began vocal and piano lessons. Rebecca is a classically trained singer who delivers her songs in an expressive mezzo-soprano accompanied by her guitar, keyboard or tenor banjo. Always striving to improve, she received Honors in both the Grade 7 RCM vocal exam and the Advanced Music Rudiments Theory Exam.

During her pre-teen years she flexed her acting muscle as she performed in musical theatre plays (Sinbad the Sailor, Annie, My Fair Lady), operas (Filumena, Pagliacci), T.V. commercials (Family Channel, Acura, Save on Foods) and as an extra in the TV series “Fear Itself” and the video “Edmonton 2030”. Rebecca is also a natrual storyteller and has had stories and poems published in the Magpie Magazine and Celebrating Words publications. Eventually at the age of 10, Rebecca combined her love of writing with her passion for music and a songwriter was born.

After two EP's, Rebecca released her first full-length CD of original music, "Not in Neverland" in June 2011. This album earned Rebecca her first CFMA nomination and a Harvard Broadcasting Exposure Travel Grant.

2012 Highlights include: Rebecca released her second CD “Myths and Monsters” produced by Alana Levandoski. This CD garnered Rebecca her second CFMA Young Performer of the Year nomination, a nominee's showcase in St. John and a nomination for an Edmonton Music Award. She was one of six finalists in the All-Albertan Song Contest for her song “Welcome to Wayne.” She received a Songwriting Boot Camp prize as a Sonic Youth at the Calgary Folk Festival Songwriting Competition and was mentored by Sam Baker. She was a finalist in the Here is Canada national contest for her song “We are Canadians”. She was selected to participate in The Galaxie Young Performers Program at the 2012 Winnipeg Folk Festival and was mentored by Royal Wood. Rebecca was chosen as a songwriting winner in the 2012 Canadian Wildlife Federation, "Get to Know Your Wild Neighbour Contest". Rebecca was one of 4 wild cards on YTV's The Next Star; making it to the top 16 out of 4000 contestants.

Accomplishments in 2013: Rebecca released her 3rd CD, Advant Garden, produced by Alana Levandoski. "Avant Garden" was nominated for 2013 CFMA Young Performer of the Year and given a nominee showcase spot. Rebecca's Folk Opera: The Earl, debuted at Nextfest in June, performed as a one woman show. Rebecca won the Sonic Youth Category of the Calgary Folkfest Songwriting Contest, and performed at the Calgary Folkfest in July as part of her prize package. Rebecca was a finalist in the Youth at The Blues Competition as part of the Beaumont Blues and Roots Music Festival on June 21. In the summer, Rebecca returned to the Winnipeg Folkfest as part of the Galaxie Young Performers Program and mentored with Melissa McClelland from the band Whitehorse. Rebecca received a grant from Victoria School Foundation for the Arts to attend the Galaxie Program. Rebecca wrote the music for 7 songs that are part of Alison Neuman's musical "Searching for Normal", which debuted at the 2013 Edmonton Fringe Festival in August. Rebecca also wrote songs for the Heritage Song Project with the Provincial Archives of Alberta which culminated in three concerts during the September Culture Days weekend. In the fall of 2013, Rebecca performed at 2 showcases as the "Young Albertan" at the Arts Touring Alliance of Alberta 2013 showcase in Red Deer and a Canadian Folk Music Awards Nominee showcase in Calgary.

In 2014, Rebecca recorded her CD, "Ode to Tennyson" with producer Barry Allen. The project revolves around songs inspired by Lord Alfred Tennyson's poetry. Production of this project was supported by a 102.3 NOW! Radio Project 10k20 recording grant. The CD includes "Lotus Eaters" which came third in the Calgary Folk Festival Songwriting Contest. "The Earl" song was selected as one of the 20 Best Edmonton Songs of 2014 by Kevin Maimann from the Edmonton Sun. "Queen of the May" was selected as a semi-finalist in the Teen Category of the 2014 International Songwriting Competition. This CD earned Rebecca another CFMA Young Performer of the Year nomination. Rebecca won the CN Youth Artist Award in the 27th Annual Mayor's Celebration of the Arts. Rebecca provided pre and post show entertainment for the The Affair for the Arts at the Keyano Theatre in Fort McMurray, headliner was William Shatner! Performing her anti-bullying song, "Nobody Likes You, But Who's Going to Tell You" Rebecca had media coverage on CBC, CTV and Global during Pink Shirt Day, and played at the YWCA "The Power of Being a Girl" Conference. She returned to Nextfest 2014 with her new one woman musical "The Great Edmonton Elephant Stampede of 1926". Rebecca played at an amazing line up of festivals during the summer including the Canmore Folk Festival, Edmonton Folk Festival and the Come to the Hills Festival. In October, Rebecca showcased at FMO in Toronto, building contacts and developing new fans.

In 2015, Rebecca attended and preformed at the Folk Alliance International Conference in Kansas City. Her song "Crawl" won an award at the Calgary Folk Festival Songwriting contest. Rebecca was excited to win "Adult Alternative Recording of the Year" at the 2015 Edmonton Music Awards for the song "Queen of the May" from her CD, Ode to Tennyson. With the help of a Factor demo grant she recorded her 5th CD, "Tattered Rose". "Tattered Rose" won Young Performer of the Year at the 2015 Canadian Folk Music Awards and made Earshots National top 10 Folk, Roots and Blues Chart. Rebecca's summer tour season was highlighted by opening for the Travelling Maybels at the Evergreen Cultural Centre in Coquitlam BC.

Rebecca is passionate about sharing her love of songwriting with others. She has mentored other songwriters as a speaker at the 2010, 2012 and 2013 Highland's Junior High School Young Readers Conference, in a presentation at Victoria School of Performing Arts, and at The School of Song 2012 Songwriting and Performance Camp. In 2013, Rebecca was part of Rhea March's Songwriting presentation for the North Central Teachers Convention. She also led a songwriting workshop at the 2013 City of Edmonton Youth Art Jam and started a weekly songwriting club at her school. In 2014 Rebecca led a songwriting session at the Riverbend Library's writing club with author Natasha Deen, and mentored elementary students with The School of Song as part of Culture Days at the Jubilee.