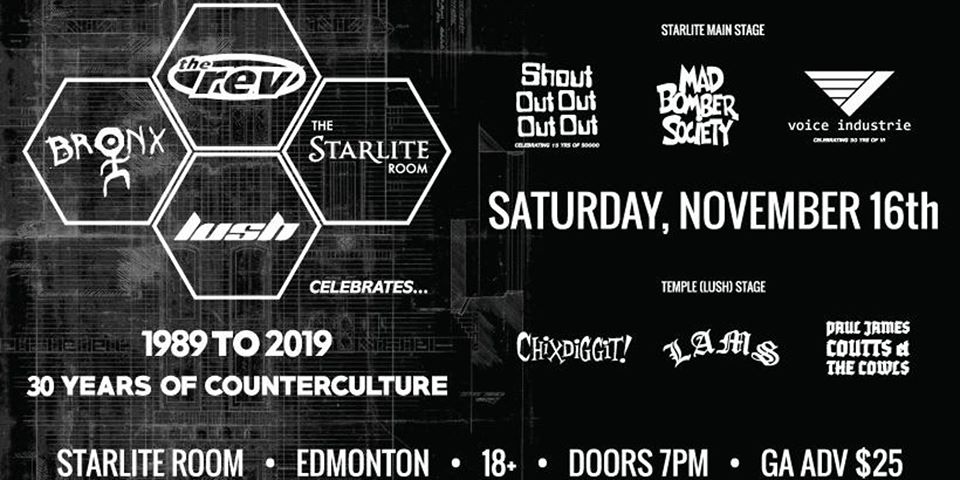 See live performances from:
Shout Out Out Out Out (15 yrs of SOOOO)
http://shoutoutoutoutout.com
Mad Bomber Society
https://www.facebook.com/MadBomberSociety/
Voice Industrie (30 yrs of VI)
http://www.voiceindustrie.com

The history of the The Starlite Room began as The Old Citadel built in Downtown Edmonton one block south of Jasper Avenue, the main artery of the city. The brick building was originally formed as a "citadel" (church or place of worship) for the Salvation Army. By 1965 it was converted into the first venue of the Citadel Theatre company, with the company taking its name from the name of the building. After the company moved to a new purpose-built theatre building on Churchill Square in 1978, the building was converted into a concert hall named The BRONX. It hosted a variety of concerts including then unknown American bands Nirvana and Green Day. In 1993 the Bronx changed to the Rev Cabaret and Lush, and in 2003 the Rev closed and was reopened as The Starlite Room in 2004.

The venue has been home to thousands of iconic performances from Questlove, to Against Me!, Run The Jewels, Edward Sharpe & The Magnetic Zeros, Feist, Mastodon, MGMT, Amon Amarth, Avenged Sevenfold, Death From Above 1979, The Dillinger Escape Plan Marianas Trench, Metric, Nightwish, Propagandhi, The Smalls, GWAR & so many more. The Starlite Room has become an Edmonton mainstay to which many local concert goers have a long history and fond memories with.

STAY TUNED FOR MORE EVENTS AND CELEBRATIONS THROUGHOUT THE YEAR!