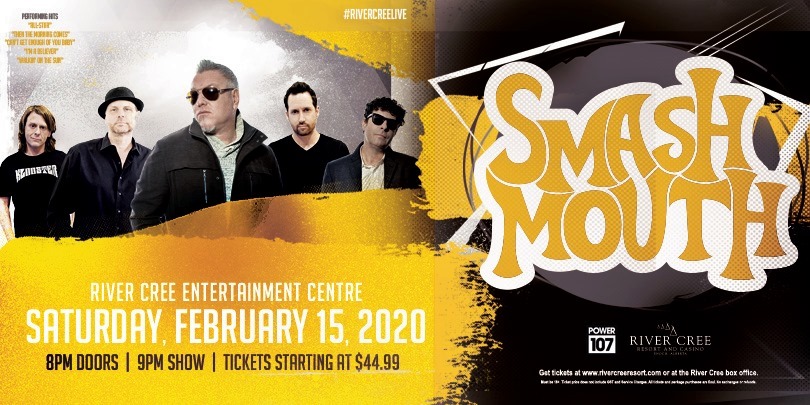 As predicted, 2018 turned out to be another stellar year for revered, MULTI-PLATINUM California pop-rockers Smash Mouth. Literally spanning the globe, Smash Mouth was active (and crushing it wherever they went) all 12 months of last year. With 151 Million Streams on Spotify, 28 million fans and 7 million hours of streaming in 65 countries, Smash Mouth remains as hot as ever. And they carry this energetic momentum straight into 2019, because for Smash Mouth...2019 will be different...2019 will be special. 2019 will be a year-long celebration of a true milestone on the band’s long and venerated journey: 2019 will be the 20-year anniversary of Smash Mouth’s QUADRUPLE PLATINUM international tour de force, career-defining, (and now classic) album “ASTROLOUNGE”.

Coming hot-on-the heals of their 1997 multi-platinum debut album “FUSH YU MANG”, very little was actually expected of “ASTROLOUNGE” prior to it’s June, 1999 release. As Smash Mouth was widely-regarded, by press and public alike, the consummate “one-hit-wonder”. “ASTROLOUNGE” (with it’s now-legendary first single “ALL-STAR”, alongside smash hits “THEN THE MORNING COMES” and “CAN’T GET ENOUGH OF YOU BABY”) didn’t just extinguish this presumption...it blew it into the stratosphere. Giving Smash Mouth the two-pronged satisfaction of forever silencing the abundant nay-sayers, while simultaneously carving themselves an international household name. One that remains firmly embedded in the cultural lexicon to this day.

A look back at SM’s formative years shows us a band determined to make an impact from the get-go. Formed in late 1994, the band immediately begins recording demos and showcasing in both San Jose and Hollywood. In June of 1997, Smash Mouth is signed to Interscope Records when label brass catch wind of an unknown band being ADDED to highly influential L.A. radio station KROQ’s playlist after only one spin of their song “Walking On The Sun”. A true Cinderella story for the ages.

Smash Mouth’s eponymous third Interscope release features the buoyant first single “PACIFIC COAST PARTY” and the smash hit “I’M A BELIEVER”. Around this time, the band crosses over into the film world...providing the heart of the “SHREK” soundtrack...and even making a cameo appearance in the 2001 comedy “RAT RACE”.

Smash Mouth bounds into 2019 with it’s classic lineup of Steve Harwell, Paul DeLisle, Greg Camp, Mike “Hippy” Klooster, and Randy Cooke, solidly intact and ready to pay homage to their masterpiece sophomore album (as well as other hits from the SM galaxy). As part of the “20th Anniversary of “ASTROLOUNGE”, the band will be releasing a special remix of “ALL-STAR” and a new album for 2019. See ya all in the ‘19 baby!